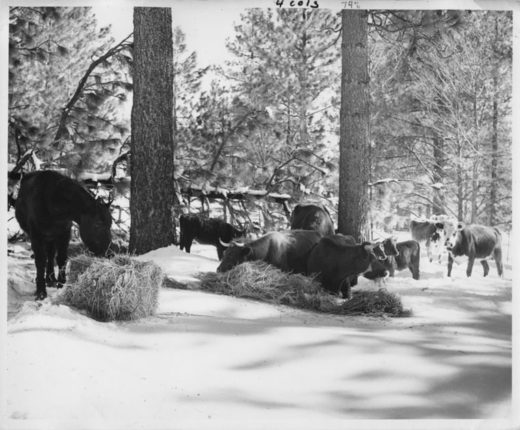 A Christmas fire at the dump caught many firemen in their Sunday-go-to-meeting clothes. Swede Pitt tramped among the the burning debris in a starched white shirt and his best pants rolled to the knees.

Hope Bell, librarian, reported that circulation in the local library doubled in 1952 over the previous year.

California Water and Telephone scheduled visits by representatives to instruct adults and children on how to use the new dial telephones.

Despite freezing weather and a sprinkling of snow, 30 bird counters sighted more than 50 species in the end-of-year bird count. Two unusual varieties were spotted: the varied thrush and Clark’s nutcracker.

A cross-country skier died and two hikers were rescued in the San Jacinto Mountains the previous week in three seperate incidents.

Doris Lombard’s third-grade class collected the most cans during the Canned Tree Drive and were treated to a party by the Idyllwild Board of Realtors.

Town Hall was transformed into a mythical undersea world, thanks to the music and dance of “O Lungo Drom” and friends. David Reid-Marr and Mark Taylor, with “O Lungo Drom,” joined with Jennifer, Jovielle and Vesper McEwen.

Dr. Candide Petrol and Dr. Ray Webb found an abandoned home on a hike, and turned it into the vacation home of their dreams. The Fern Valley home was featured on “Homes Across America” on the Home and Garden Television Network.

The Astronomical Society of the Desert held its  monthly meeting and star party at sundown at the Sawmill Trailhead parking lot in Pinyon.