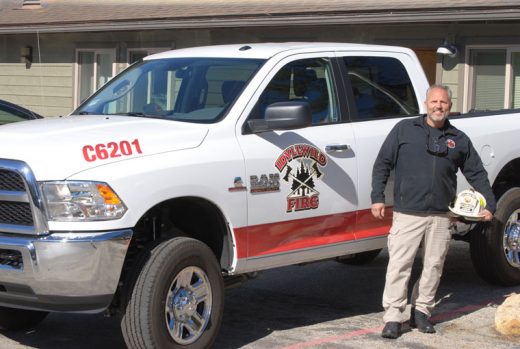 Andrewson has been on the commission since December 2013 and was first elected president last year.

In other business, the commission discussed the proposed Advance Life Support contract between Riverside County and IFPD. The county’s Emergency Medical Department has these agreements with all agencies that provide emergency ground ambulance transport services within Riverside County.

A vote on the agreement was tabled to a future meeting.

Although the two agencies have been working on an agreement for 18 months, Fire Chief Patrick Reitz told the commission that concerns about the map depicting the district’s exclusive service area and the potential obligation to comply with any requirement from the county’s EMD Agency regardless of cost or effectiveness remain unsettled.

The map issue will depend upon IFPD providing the evidence for changes, according to Bruce Barton, Riverside County EMD director.

The current maps were supplied by the county’s Local Agency Formation Committee, Barton said. But if adjustments are needed, he said, “If IFPD has evidence, we’ll take it to LAFCO to pursue the matter.”

Reitz noted that some of the requirements, which apply to all medical emergency services in the county, are difficult to achieve in the Hill’s mountainous terrain. He labeled them “unfunded mandates.”

For example, the county’s data software is incompatible with IFPD’s and some mobile equipment does not function well on the Hill, he said. Better GPS equipment could cost IFPD about $100,000 per year, to which Reitz objects because of the cost and Buchanan described as “cost prohibitive.”

He said that he and Barton are working on finding a common solution to these issues.

Once IFPD and the county agency reach concurrence, the agreement will supersede the current letter of understanding. The principal policy, which the new agreement will address, is “the closest unit concept,” Reitz stated.

“It will allow us to go outside of our area,” he said. “It will always be about the closest unit to the incident.” He added that this would affect only the district’s ambulance service not its fire service.

But Reitz concurs in the need for the agreement and is optimistic that he and Barton can resolve these concerns. “It’s to everybody’s benefit,” he stated.

For the first half of fiscal year 2017-18, expenses have exceeded revenues by about $190,000. The district’s reserves and advance on the property-tax revenue offset the deficit.

During the second half of the fiscal year, IFPD receives a greater share of its property-tax revenue. Also, reimbursements for the numerous mutual-aid incidents to which it responds during the summer and fall fire season should arrive. Anticipated receipts from these two activities exceed $1 million.

Also, some cost items such as workers’ compensation liability and property insurance are paid in full during the early part of the fiscal year.

Salaries and benefits were greater than 50 percent halfway through the fiscal year, but that is a result of the mutual aid responses, said Battalion Chief Mark LaMont. These costs will ultimately be reimbursed.

During 2017, IFPD was dispatched to 15 fires outside the district, LaMont reported. These incidents ranged from small to extremely large. During December, an IFPD team was assigned to the Thomas Fire, which exceeded 280,000 acres, becoming the largest in California history.

“The cost to IFPD is zero. There were no injuries. And the training opportunities were unparallel,” he told the commission.

The Ad Hoc Committee for a future parcel fee or tax measure will meet before the February commission meeting (Feb. 28) and bring their thoughts and plans to the full commission then, according to Sawicki.