The ninth-annual Idyllwild International Festival of Cinema will present its fifth-annual Children’s Film Fest, the brainchild of Andrea Charles, executive artist liaison for the IIFC.

“It was my first year; I volunteered to view movies,” Charles said. After several weeks of watching films for submission to the festival, she asked Stephen Savage, the IIFC founder and director, about the place and role for films aimed at a younger audience.

“I told her if it was an interest to run with it,” Savage said, so she created the children’s festival within the IIFC.

One of Charles’ first steps was to approach Shannon Ng, branch manager of the Idyllwild Library. Charles needed a venue for these films, which are usually much shorter than the features in the festival. Ng agreed to provide the location. The Idyllwild Library continues to house the Children’s Film Festival.

“That first year, we showed a half dozen films and it was quite successful,” Charles said.

So successful, that 2018 is the fifth event and even more films will be shown. Some of the filmmakers gave Charles their DVDs and now she has a small library of children’s films to augment the children’s festival.

The Children’s Film Festival starts at 2 p.m. Saturday, March 10. The first half of the program will show films for tiny tots and the second half, which aims for an older group of children, includes a 15-minute short film. Three of the films are animated, according to Charles.

Charles also is the celebrated author of the well-known children’s book, “Harvey’s Favorite Day.” She said volunteering for the children’s festival “doesn’t feel like work at all; I love it.” Her own rottweiler, Harvey, was the inspiration for her book. 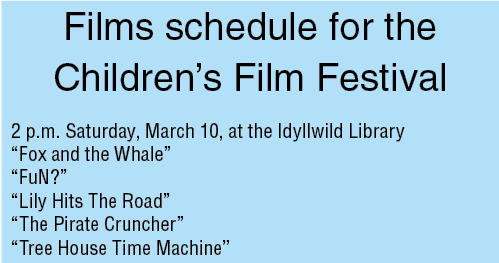