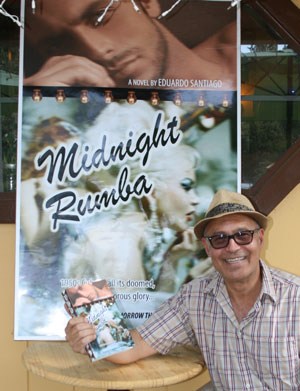 In September 2015, two local book clubs, enamored of Eduardo Santiago’s novel “Midnight Rumba,” suggested Santiago head a book tour to Cuba. “Midnight Rumba” (Cuban Heel Press, 2013) is set largely in Havana, and Santiago’s literary admirers thought it would be fun to accompany the author to his Cuban homeland and visit key places where important scenes in the novel play out.

One key location is the Presidential Palace, inside the office of then-Cuban President Fulgencio Batista. “We’d actually get to go inside that office,” said Santiago, “as well as other key places where action in the book takes place. Many of these locations are historical.”

Santiago contacted a reputable tour packager who gave a presentation to the interested book club members. “Seventeen people signed up and more than half put down deposits,” said Santiago. But one by one people dropped out and requested deposits back. Santiago said he was mystified since it wasn’t his idea to go and didn’t necessarily want to go at this time in his career.

“Why they dropped out is still cloaked in mystery to me,” said Santiago. “And now I’m thinking we won’t go.” But rather than see cancelation, friends of Santiago began to sign up, the travel agent began to work the details and once again the trip is on, with 10 signed up to go. “Ten was the minimum number the agent needed to make the trip feasible,” said Santiago. “And now we have that. The trip is scheduled for March 19 though 26.”

Any additional people interested in visiting Cuba and savoring the la vida of “Midnight Rumba” in the actual places where it is set should contact Santiago at 323-377-9730.

For more about Santiago and his work, visit www.eduardosantiago.com.