The voter turnout for last week’s statewide primary election has been described as in terms of low and “no wave,” and as high and competitive. At least in Riverside County, while the early results may have seemed below expectations, the final results will indicate that voters were more involved and must care about the results more than in past primaries.

As of Friday evening, June 8, about 231,500 ballots have been counted. That represents 23.5 percent of the registered voters in the county. However, Registrar of Voters Rebecca Spencer also reported that about 86,000 ballots remain to be counted. This raises the number of voters to 32.3 percent of registration.

While that is only one-third of voters, primaries seldom attract the turnout of regular elections. For example, 75 percent of registered voters cast ballots in the 2016 presidential election.

So, the 2018 turnout in Riverside County already exceeds the 2014 vote of 22.3 percent and when the remaining ballots are counted, it should exceed the average turnout for all primaries in the past 10 years.

Statewide, as of Monday morning, June 11, the turnout was 26 percent, with about 2.5 million ballots remaining to be counted. This could raise the final turnout to 39 percent.

The registrar has not released any precinct data yet, so there is no way to identify which areas of the county had higher or lower turnout. 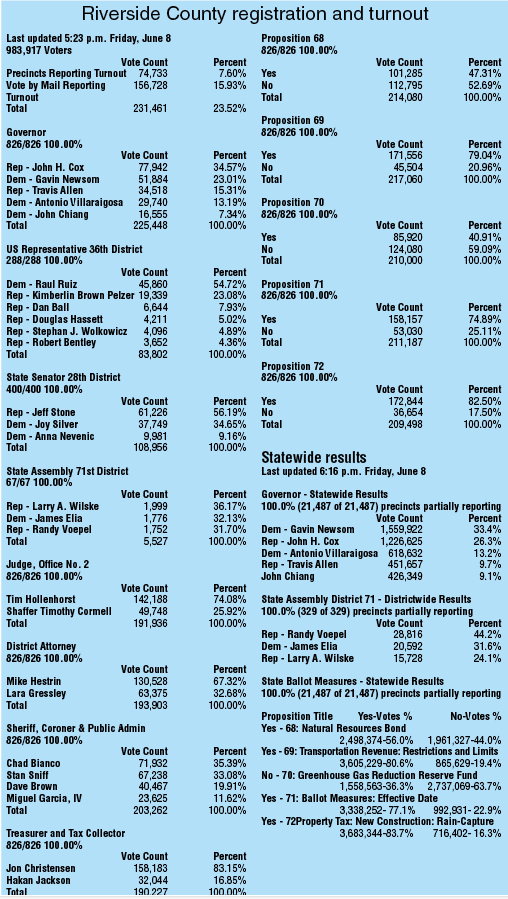