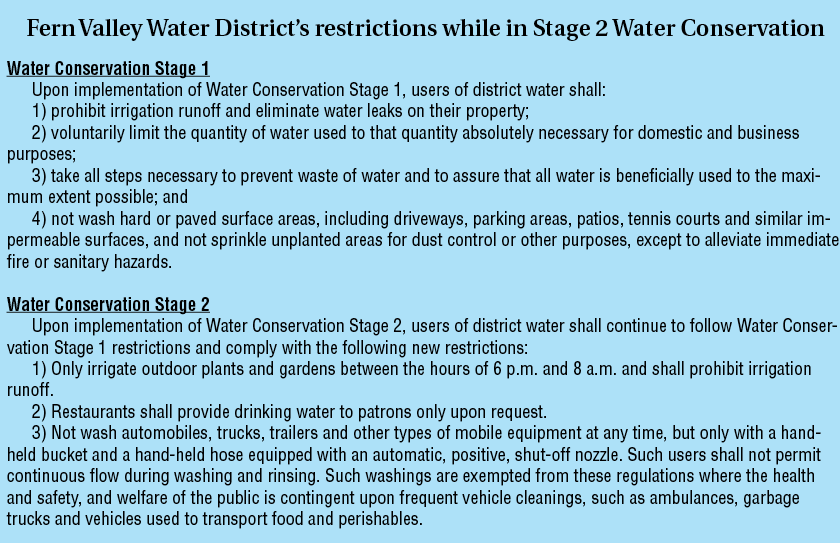 At the July 20 board meeting, FVWD directors unanimously ratified his action. “It was a prudent decision,” said Director Robert Krieger.

In addition to less stream flow, a problem with the surface-water treatment plants has increased reliance on well water in the past month. Groundwater wells were the source of nearly three-quarters of the district’s water in June compared to 17 and 25 percent in June 2016 and 2015, respectively.

The problem at the treatment plants has been fixed, they have been cleaned and purified, and Jimenez said he is about to re-activate them.

After declining from 2013 through 2016, production has increased the past two years. It is 14 percent greater than the 2016 low. The last year when production for the first six months was greater than this year was in 2013.

Increased production and the recent rate increase have boosted revenues. For the billing period — May and June — total revenue was nearly $140,000, which is about 40 percent greater than 2017. This is largely due to the increased service fees, which went from $41,000 last year to $73,200 this year.

Actual water sales increased $7,300 or 12 percent compared to the service charge change of nearly 80 percent. In response to a question about the revenue growth, Jimenez explained that the higher service charges were largely on multiple-unit properties.

“They were getting a large allotment before and basically being subsidized,” he told the board. “We’ve gone from 35 percent of revenue from fixed rates to 60 percent. It should have gone up a long time ago. Now it is where it should have been.”