If campaign donations reflect votes, the Democratic challenger, Joy Silver,  has more than incumbent Republican state Sen. Jeff Stone. However, the Nov. 6 election is still more than two months away.

Not only is Stone the incumbent, but he has represented much of the district as a Riverside County supervisor, giving him a substantial lead in name recognition.

At this point in the 2014 campaign, when Stone defeated fellow Republican Bonnie Garcia, he had raised more than $400,000. As of June 30 of this year, his total contributions are about 60 percent of that total.

Silver, born in Pennsylvania, spent much of her early career on the East Coast. She moved to New Mexico, and in 2007, settled in the Palm Springs, where she continues to be concerned about health care and services for people who need help.

Silver has had far more contributors. Thirty-five contributions were greater than $2,000. Labor unions, such as the Teamsters and Electrical Workers, and desert residents were the majority of these donors. However, the largest donor was Silver, who has loaned her campaign $50,000.

Ten of Silver’s contributors were from Idyllwild, accounting for $1,650.

Silver has been the beneficiary of substantial out-of-state contributions, more than $50,000. The majority has come from New York, but contributors also range from Massachusetts, New Jersey and Florida to Washington and Alaska.

Stone has gotten his share of political action committee funds, too. Associated General Contractors, Anheuser Busch, peace officers, pharmacist groups, energy companies and others from Sacramento have contributed to his campaign. Through the end of June, Stone had received 19 contributions from outside of California, mostly corporate donors. These totaled about $25,000 or 10 percent of his funding.

Nearly two-thirds of his expenses were paid from the balance of his 2014 campaign account. This includes payments of about $42,000 for campaign literature and mailings, and $12,000 to a campaign consultant. Most of these costs were in the summer and fall of 2017 and totaled $160,400, according to his financial reports to the Secretary of State’s office. 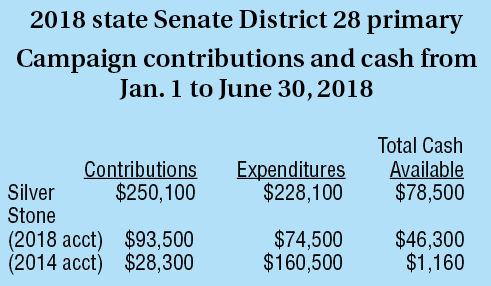