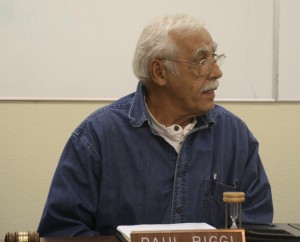 conducted a brief and efficient meeting in his final role as Idyllwild Fire Protection District vice president. Overseeing a special meeting, the commission elected officers, at least, until the new full commission meets on Dec. 13 and approved a resolution for a fire equipment grant.

Commissioner Jeannine Charles-Stigall was chosen president, Dr. Charles “Chip” Schelly is the new vice president and Pete Capparelli will serve as secretary. The votes were unanimous.

The commission also approved a resolution necessary to obtain CAL FIRE funding for purchase of new fire equipment.
Fire Chief Norm Walker said the equipment included pants, shirts and fiare shelters for the career staff. The grant could be for as $11,900; however, Walker told the board he had budgeted only $2,500.

The department’s new volunteer company is supposed to discuss the grant funding this week end, according to Walker. The volunteers can use their money for equipment from the grant also.

After these actions, the commission went into closed session to hold its annual evaluation of the Chief Walker.