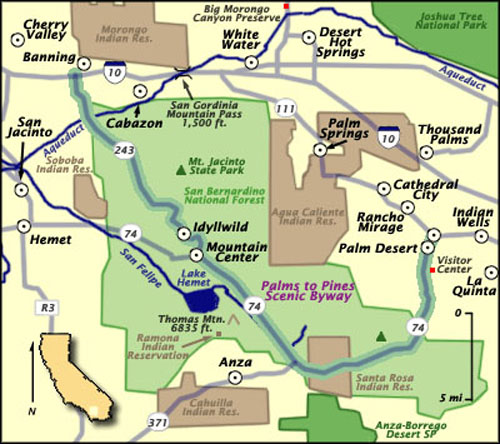 The Palms to Pines Scenic Byway Corridor Management Plan was completed in June 2012 as a necessary precondition to submitting a nomination for designation as a National Scenic Byway.

Highway 74 was designated a State Scenic Highway in 1971, Highway 243 in 1972 and both were subsequently designated a National Forest Scenic Byway in 1993.

Submission of a nomination generally follows garnering support from communities along the route and reaching consensus within those communities on goals for the byway. Finding that agreement and support on the Hill may prove challenging, thinks Sheffield, although there are other goals and available funding short of national designation.

The Tuesday meeting asked attendees to select five priorities for potential future projects along the Palms to Pines state scenic byway. Those identified concerned Highway 74 and were centered on safety and implementing traffic counts; improving turnout signing that cites violation code for failure to pull over; improving parking at the National Monument Visitor Center to reduce impact on Highway 74; and rehabbing faded and damaged signs at the Cahuilla Tewanet vista site.

The corridor management plan is designed to protect and enhance a byway’s intrinsic qualities and character and create a case for national nomination. The written plan is developed in consultation with communities along the proposed route. For the Palms to Pines corridor, Highway 74 is the backbone, and communities along the route are from Palm Desert to Mountain Center. The proposed byway connects to Highway 243 and continues north through Idyllwild to Banning.

Plan implementation, according to Sheffield, waits for the Federal Highway Administration’s request for nominations. Currently, there are no calls or authorizations. Second, a local organization or agency must indicate interest in seeking a nomination.

Timory Peel, natural resource planner for the Forest Service, indicated the FS is interested in supporting a nomination for national designation and would complete the required paperwork, but the nomination itself must come from a community organization.

But Hill community meetings from which the plan evolved revealed conflicting concerns and agendas among attendees that could complicate or derail national designation. Tourist-dependent communities such as Idyllwild could benefit from more tourists and the influx of tourist dollars. A national scenic byway designation could further that goal.

Attendees from other communities such as Pinyon and Garner Valley expressed primary concerns over increased traffic and the potential for more noise and traffic accidents. They showed little to no enthusiasm for more tourism.

Although there seems to be some consensus for greater highway safety and preservation of the area’s natural resources, according to Sheffield, there was little consensus on creating the art and signage that would draw people onto the byway from adjacent Interstate 10 or from other area population centers.

“At this point, we’re in a holding pattern. There would be no nomination [based on present lack of consensus],” Peel said. “The original grant involved two key objectives. Complete a plan, and we’ve done that, and build community consensus. Even with all the promotion for the corridor meetings, we just did not generate enough interest.”

At present, no further steps or meetings are planned until after the first of the year.