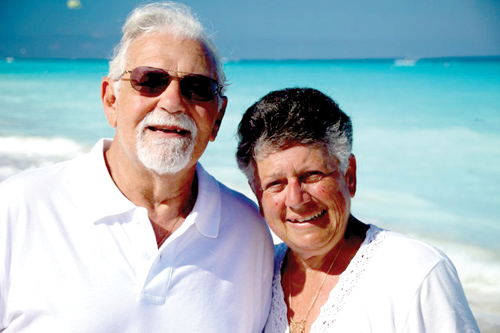 Married on Nov. 24, 1962, Lou and Annamarie have shared a lifetime together. They were both raised in Jersey City, N.J., and lived across the street from each other. At the ages of 14 and 15 they began dating and were married five years later.

Lou was stationed at Miramar Naval Base at the time and hence their move to California in a 1960 VW Bug draped with many water containers for the long drive across the desert. In Lemon Grove, a suburb of San Diego, they raised four children: David, a captain in the Navy; Stephen, a medical assistant; Angela, an engineer for Level 3 Communications; and Vincent, a sous-chef in Clarksville, Fla.

Annamarie, working as the advising coordinator at San Diego Magazine, put Lou through college with only one requirement — that he maintain a B average. He did and graduated with honors. Lou was a teacher in San Diego for 35 years and Annamarie was a school secretary for 25 years.

They built a home in Idyllwild in 1985 and were part-timers until their retirement in 2003. Currently they are involved in many community organizations and Lou is still substitute teaching. They will be celebrating their anniversary on Saturday at the Harvest Festival and by selling hotdogs at the Tree Lighting Ceremony.

On Friday, Dec. 14, family and friends will gather to celebrate this occasion.