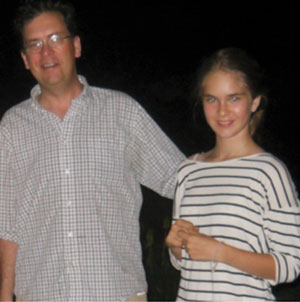 George B. Pratt, Idyllwild resident since 2007, died at home in his sleep Monday, May 12, 2014, after a heart operation to replace his mitral valve. George moved to Idyllwild to teach English at Idyllwild Arts Academy. He is survived by his wife, Sydney Robertson, and beloved daughter, Carmen Pratt.

Born in New York on Nov. 3, 1964, George lived a peripatetic life, spending his childhood in Hastings-on-Hudson, New York; Houston, Texas; Toronto, Canada; and New Canaan, Connecticut. He attended Connecticut College and, after graduating with a degree in English literature, moved to the Bay area in 1987 due to its vibrant theater scene. He then moved to Chicago and returned to California where he married his wife. Married 22 years, Sydney and George lived and taught in Ojai, California; Beijing, China; Rennes, France; and Orange County, California before moving to Idyllwild.

George became a teacher while living in Ojai, and it quickly became his passion. Teaching allowed him to combine his interest in and knowledge of literature, theater, film and music as a means to inspire and challenge adolescents. Always demanding, always pushing students to dig a little deeper to gain knowledge, he was a beloved figure on campus. As one of his former students wrote, “Every student was a scholar, everything was important, but it was always also fun and full of delight.” In addition to being a gifted teacher, George was a novelist, playwright and musician, performing most recently with the band, the Large Richards in Idyllwild.

Besides his wife and daughter, George is survived by his parents, Mark and Susie Pratt of Westerly, Rhode Island; brother Stephen Pratt of Dover, Massachusetts; sister Darcie Wallace of Marietta, Georgia; and four brothers-in-law, four sisters-in-law, four nieces; and seven nephews. He is missed by a legion of former colleagues, students, friends and his family. Above all, George was a loyal, devoted father, friend, son, brother, mentor and uncle, whose irreverence and mischievous sense of fun will be sorely missed. To celebrate this wonderful man, we invite you to put on a pair of weird socks, wear a baseball hat for a team you dislike, read a classic novel, learn new words and their derivations or travel.