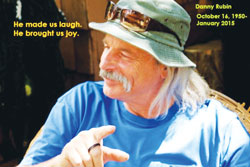 A beneficiary of his mom, Winnie’s, “Brit Wit” and his own brand of sparkling personality, he was involved in theater at Hollywood High School.

Introduced to Idyllwild in the 1960s, he fell in love with the natural beauty and was living on the Hill by the early 1970s. His mom came up here a little later and stayed the rest of her life.

Besides the rock & roll and folk music genres his generation grew up with, he had an encyclopedic knowledge of American blues and was well-versed in jazz as well.

Danny walked nearly everywhere he went mostly because the shell of an automobile would separate him from the nature he loved so well. Forest critters seemed to know and love him in return, coming up to him to be fed by his hand.

Danny was loved by nearly all who knew him because of his drive to make others smile and laugh (and to think about things in new and different perspectives). Such also was his relation to people that he would give his full attention to their story. It seems everyone can tell of a time that he made some profound influence on their lives even for just a few moments.

The Japanese have a perspective that suggests we have two levels of dying. The first is when your body dies and the second is when the last person who remembers you personally passes on. Danny’s warmth and caring spirit touched so many people in his life, both young and old, that his second passing may be a very long time coming.

In lieu of flowers or donations, please remember to be kind to each other. Memorial services are pending for spring.