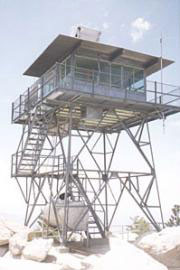 During fire season, federal, state and local fire agencies are at maximum alert; and a cadre of nearly 300 volunteers provides critical help.

The Fire Lookout Host program is composed of volunteers from through the Southern California, who trek out to the seven Lookout stations strategically located throughout the San Bernardino National Forest. The Hill is home to three lookout stations — Black Mountain, north of Pine Cove, Red Mountain in Anza, and Tahquitz Peak, overlooking Idyllwild.

While each shift is four and a half hours, the time to hike into the station and out requires about a nine-hour day, said SBNF Lookout Coordinator Pam Morey. They also bring their own food and water.

Morey and her husband George have been involved in the Fire Lookout program for nearly two decades. After moving to Cedarpines Park, the pastor at their local church introduced them to the Strawberry Peak Lookout.

“The Strawberry Peak Lookout overlooked our new home,” Pam said. “Once we saw that and how we are protecting it, we loved the lookout.”

Since then they have been actively involved with the whole program from recruiting and training to repairing and maintaining. With his construction background, George did much of the work restoring the Black Mountain Lookout.

The long drives do not matter to them; the opportunity has been too enjoyable. Pam described buying a pickup truck, “In 2010 I traded in my 2000 pickup for a new one. During those 10 years, I had driven more than 400,000 miles.”

And their involvement has been vital, “I spotted a fire on the Morongo Reservation from Black Mountain. It’s a perfect view of Banning.” She has recorded three first reports during her hours in the towers.

The fires they look for and see are not always in the distance, but she said “we’ve never felt trapped. We’re trained what to look for.” For instance, major changes in the wind are a caution and they are taught to use their judgment on whether to stay. “We know how long it takes to get back to the vehicle.”

Fire lookouts have a long history and in 1876 the first known lookout tower was built in the U.S. In the 1930s the Civilian Conservation Corp (built many lookouts, including numerous ones in Southern California). But expanding development resulted in the loss of many, until only seven remained here.

Black Mountain Fire Lookout (elevation 7,772 ft.) was built in 1926 and was the third lookout built on the SBNF. In 1935 the original lookout was disassembled and rebuilt on Barton Peak. The lookout that sits on Black Mountain today was completed in 1962. The Black Mountain lookout leader is Ed Harrison.

Red Mountain (elevation 4,573 ft.) is located in the southern part of the SBNF southeast of Hemet. Red Mountain, which the CCC constructed in 1937, is the newest lookout on the SBNF. The Red Mountain lookout leader is Paul McDonnell.

Tahquitz Peak Lookout (elevation 8,828 ft.) is the highest lookout in the SBNF and is the forest’s longest continuously operated station, serving some 77 years. Tahquitz is the only lookout located inside a Wilderness area, which means all work must be done with regular hand tools — no power tools, not even cordless, are allowed. The Tahquitz Peak lookout leader is Joe Bressi.

Hundreds of Fire Lookout Hosts give more than 17,000 volunteer hours each year from May through November to spotting smoke, educating visitors about the history of the fire lookouts, mountain ecology, and keeping the lookouts a vibrant part of our local mountains.

To be a fire lookout host, volunteers are required to be trained and the program consists of four steps:

• Orientation: two-hour introduction to the program

• In-Tower Training: eight-hour, hands on training that takes place in the Lookout with an experienced Host.

All of the lookout towers have a porta-potty, no running water, and few have heat, you choose what lookout you would like to volunteer at. We do not choose for you.

If you have any questions, please feel free to contact Pam Morey at [email protected] or visit the Southern California Mountains Foundation Lookout web site http://mountainsfoundation.org/fire-lookouts.