California’s minimum wage is headed to $15 per hour, but it will take six years to reach that level, according to an agreement Gov. Edmund G. Brown Jr., state legislators and labor leaders announced Monday.

“This is economic justice,” Brown said at Monday’s press conference announcing the agreement. “It makes sense and will help our entire state do much better for its citizens.”

After January 2023, the state’s minimum wage will be indexed for inflation at a maximum of 3.5 percent each year.

Brown stressed that the wage will rise gradually and that there is flexibility in the proposal in case of a recession or budgetary downturns.

“This proposal is the result of lots of thinking and discussions and looking at ideas from a lot of sources,” he added.

If the statewide job growth or retail sales weaken over a quarter, six months or a year time frame, the governor will have the ability to pause the next year’s increase for a year. A state budget deficit can also trigger a delay.

The deal may obviate an initiative, which only last week qualified for the November ballot, that would have reached the $15 level in 2021, a year ahead of this agreement.

Not all organizations support the idea. In a press release Monday morning before the official announcement, the National Federation of Independent Business stated its opposition.

“Small businesses in California are still struggling to cope with the 25-percent minimum-wage hike over just the past two years. Proposing a 50-percent increase on top of that is reckless and ignores serious negative consequences, including job loss and increased costs to job creators, senior citizens and nonprofits,” said NFIB/CA State Executive Director Tom Scott.

“The consequences of this action will lead to fewer entry-level jobs, especially for young people just starting out in the job market, higher prices for consumers and even more reluctance for small business entrepreneurs to start or grow their operations in California,” he said in a press release. “It is almost impossible right now to go to a drive-thru restaurant in California for a single meal and spend less than $10. In order to remain competitive, business owners will now have to both raise prices and hire fewer employees.”

In September 2013, Brown signed legislation to raise the state minimum wage from $8 per hour to $10 effective Jan. 1, 2016. According to the governor’s press release, California has 7 million hourly workers and almost 30 percent earn the minimum wage.

Currently, the highest minimum wage in the U.S. is $10.50 for Washington, D.C. The only other state matching California’s $10 rate is Massachusetts. 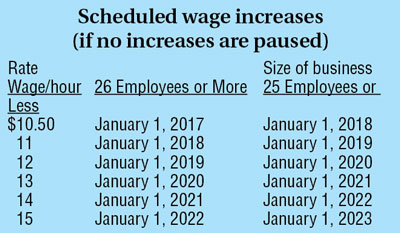