Despite rain showers and clouds for most of the past five days, the dreaded El Niño has not drenched the Hill. The rain that has fallen since Thursday is barely half of the historic April showers on the Hill.

Pine Cove has recorded 1.56 inches this week, while the Keenwild Ranger Station has recorded 1.46 inches. Normal rainfall for April is about 2 inches.

With this week’s rain, the total since July 1, 2015, has been more than 23 inches in Pine Cove and 19 inches at Keenwild, which is at a lower elevation. The historic average rainfall from July 1 through the end of March is 22.8 inches and 24.8 inches through the end of April.

The last time rainfall amounts reached the historic average of 25.7 inches for a full year was 2011. In 2010, rainfall came within 2 inches of the average.

Statewide, the Department of Water Resources reported, “Water content of the mountain snow pack today is only 87 percent of the March 30 historical average.”

According to the agency’s press release, California’s snow pack usually reaches its peak depth and water content each year around the first of April. Last week’s measurements were disappointing since many “… had expected to benefit more than [they have] from El Niño conditions.” 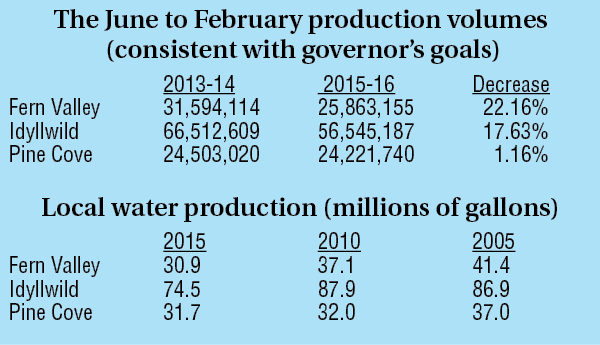 Locally, the customers of all three water districts have reduced their consumption in the past nine months compared to the same period in 2013-14. The greatest fall was Fern Valley Water District, where production was down 22 percent.