We have heard a lot this past several months about El Niño — about how it is or was supposed to deluge us with rain — and other dire predictions. And in some areas, especially further north, that seems to be the case.

However, here, with every predicted rain or snowfall, we heard that the anticipated El Niño has arrived, only to be followed by even more of that sunshine we are famous for. Again, with this last series of rain, we wondered, has it finally come? Or is it just a typical April showers bring May flowers?

With a prediction of more than a week of sunny days coming up, we are not sure and one begins to wonder …where is El Niño?

Although we and the weather people are all probably wondering the same, this article is actually not about whether they were right or wrong about El Niño but some background on why it is called El Niño. This in itself should not only prove

interesting but demonstrates how important weather and its long-term sibling, climate, are to the livelihoods of humans all along the western coast of the Americas and even on the other side of the Pacific.

Scientifically, El Niño is properly called the El Niño-Southern Oscillation (ENSO for short). Like most scientific names of things, except for the El Niño part, they can be kind of dry and boring. The Southern Oscillation part of the name indicates how ENSO would affect our weather. It refers to the winds and sea surface temperatures over the tropical eastern Pacific Ocean (yawn … straight out of Wikipedia.).

Though this is actually the important part of why ENSO has effects on our weather, it still does not explain the El Niño part.

To understand why we call it El Niño, we need to go back in time and south in distance, all the way to Peru and to colonial times. Back in colonial Peru, and likely for centuries before, people living along the coast of much of Peru depended on the ocean for food. This is because much of western Peru is dry and desert-like.

This has to do with the wind patterns I wrote about earlier (Town Crier, Sept. 10, 2015) and the fact that most times the current along the coast brought cold water and air up from the Antarctic region. With little moisture in this cold air, little precipitation fell on the land.

However, these cold waters were rich in nutrients and supported an abundant off-coast fishery. This is the “normal” pattern and the inhabitants, precolonial and after, adjusted to it.

However beneficial the rain might have been, it often fell in such torrents that it caused local flooding and destruction. Coupled with this was the lack of nutrient-rich water offshore, which led to a collapse of the fishing industry and the death of sea birds and mammals. In general, El Niño years were looked upon with trepidation and fear by locals. But why call it El Niño?

As it turns out, the conditions leading to this devastating weather pattern usually began around Christmas time. El Niño in Spanish refers to the Christ child and so, one legend has it that the phenomenon was named after the season.

However, beyond that, even today many people hold rituals where they parade with a statue of the Christ child, pleading him to protect them from the destruction of the El Niño event. In fact, as many of these rituals are recorded in church history, some past El Niño events have been tracked by examining these records.

So there you have it. With it occurring around Christmas and with rituals pleading the Christ child, El Niño, for protection from its devastation, the term came to be associated with a significant climatological event.

This event was originally thought to only affect the people of Peru. However, we now know that El Niño effects are felt globally and can explain periods of drought/deluge in places as far away as India and including right here in Idyllwild.

The influence of these El Niño events on human history in terms of famines, flooding, and disease continue to demonstrate that, even in these modern times, we are still a part of nature and not apart from her. 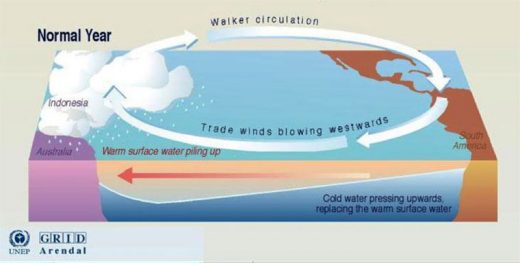