At its July meeting, the Pine Cove Property Owners Association announced its annual donations to local community organizations. This year, PCPOA is giving $7,900, $600 more than the 2015 gift total.

Two organizations — the Idyllwild HELP Center and Mountain Disaster Preparedness — received $1,500 each. And two others —Pine Cove Fire Station 23 and the Idyllwild Area Historical Society — were beneficiaries of $1,000 each.

The organization’s membership exceeds 800 now, according to Treasurer Annamarie Padula.

After welcoming the beneficiaries and distributing the checks, President Marlene Pierce announced that the organization would not be able to participate in this year’s Fourth of July parade. Among the reasons was the lack of a truck usually available to transport the contingent. She is hopeful PCPOA will return to the parade route in 2017. 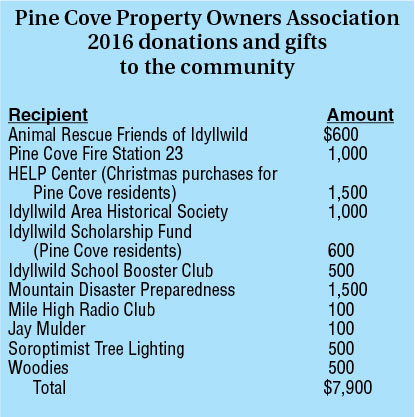