I wrote this almost 10 years ago and it still applies:

The advantages of snail mail are becoming apparent in the new age of technology.

Don’t get me wrong, I love e-mail for several reasons. Columns and letters to the editor don’t have to be retyped. And there is an ease and speed of communicating through e-mail versus postal mail and phone calls.

But this convenience has changed the way we do business — and not all of it is positive. We have become sloppy, and it’s not pretty.

First, formal and business communication styles went out the window with the typewriter. E-mail communication is so much more informal in business practice that it essentially is more like in-house memo writing — but poorly handled.

In a former world, if you sent a letter, it was carefully typed in business style and proofed by someone other than you before it was mailed. Not likely in the e-mail world, unfortunately.

People have become so lax at communicating through e-mail that they often push the “send” button before rereading what they wrote or sharing it with another office worker.

I often get e-mail I can’t make sense of because words are left out or used incorrectly.

I’m guilty of the same. I’ve received responses to my e-mails and re-read my original message with embarrassment. I’m an editor, for Pete’s sake. It truly does reflect poorly on a company or person when they can’t put a sentence together well.

And we forget how easy it is to share e-mail — how easy someone might forward your message when you only intended it for “To:” Ow.

If you have trouble with grammar or spelling — and you care about making a good impression — I suggest you type important business e-mail in a Word program or some other that allows you to run a spelling and grammar check, then copy and paste the message into your e-mail.

Today in 2017, 10 years later, even handwriting faces extinction, as some teachers refer to it as a “font.”

Cell-phone texting was fairly new, too. But all that’s old hat now to millenials and even folk my age who still strive to keep up with the times. 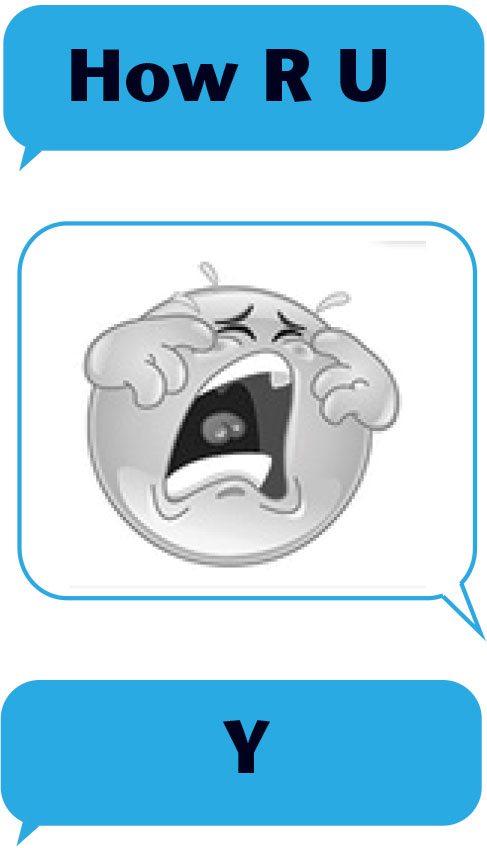 These technological advancements have brought the languages of cultures who use them to their knees. Languages have rapidly disentegrated into a lexicon of alphabetical characters and emoticons. Oh, and forget the punctuation — unless, of course, it’s the poor, abused and overworked exclamation point.

I remember when “all caps” was considered shouting at someone. Now, using a period when texting is the new rude. But not an exclamation point! Or two!! Or three!!!

I imagine linguists are having the time of their lives while editors at Websters and the Oxford English Dictionary sit pulling out what few hairs are left in their heads.

My personal opinion on all this social media is that it often discourages intelligent, one-on-one conversation and/or debate, and encourages mud-smearing and uncivility.

I feel that way about the telephone, too, even though I use it because if I didn’t, I’d be lost in the sea. I just like to look at a person’s face when we talk. I can see their emotions and sense where they’re coming from.

That’s why I prefer a good, old-fashioned lunch with a friend over these “conveniences.” We don’t wear fake masks or speak in a clipped language. We just are.