Trinity Houston, executive director of the Idyllwild International Festival of Cinema, was surprised when there was some pushback from several attending filmmakers or their representatives over the film “Standpoint” winning five IIFC awards, including Best Short Film, Best Director, Best Cinematography, Best Actress and Best Supporting Actress.

“Standpoint” was made in 2016 by students at Idyllwild Arts Academy. It featured a former IAA graduate as lead actress, an Idyllwild local musician and actress as supporting actress, and was shot in Idyllwild. “Some filmmakers or representatives attending the awards ceremony were complaining ‘we gave one of our own’ the award,” said Houston. “There were over 30 judges, almost all from off the Hill, that were looking at his [“Standpoint” director Erick Hirschhorn’s] film. We got very, very high scores back on his film.”

Houston noted the competition in the Short Film category was strong but that “Standpoint,” with its outstanding theme and story, direction, performances and especially elegant and nuanced cinematography deserved to win.

Noted cinematographer Juan Ruiz Anchía, for whom the IIFC cinematography award is named, reviews the finalists in each category before making his recommendation. Anchía, multiple Emmy nominee and best known for being DP (Director of Photography) on David Mamet’s “Glengarry Glen Ross,” has more than 73 international credits in cinematography. Houston said Anchía was especially excited about Hirschhorn’s film. “Juan Anchía chooses for cinematography,” said Houston. “We handed over the top five short films to him. He picked ‘Standpoint.’ There is a special validity to that winner.”

Houston noted that director Hirschhorn will be a force to be reckoned with in the coming years. “He has a mission,” said Houston. “He is a very passionate young filmmaker. He justly won that award.” 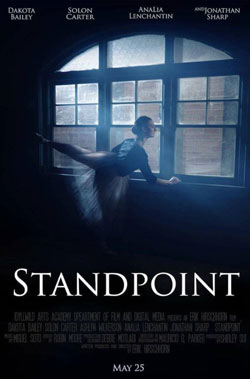 She observed that IAA did not submit the film into the festival as a student film, even though it was made by students. Hirschhorn paid the entry fee and submitted the film directly into the Short Film category, competing with all other indie submissions in that category.

AS IIFC grows, the quality of the films submitted for competition also has grown. The visual look of “Standpoint” was recognized for the nuanced lighting and perspective of its opening dance segment, a beautiful unbroken shot in a field in which its ballerina heroine is dancing with a diaphanous shawl, and for the subtle excellence of its acting, script, music and visuals. The sophistication of the concept and overall filmmaking were reasons cited for the award. “This [excellence] can be seen by anyone who watches this film,” said Houston. The “Standpoint” trailer shows several of these elegant shots and illustrates the overall professional quality of the film. To watch the trailer, visit www.youtube.com/watch?v=dYxyCWHG4cs.

“Hired Gun,” a documentary about the side musicians who play in sessions and tour with acts, won for Best Documentary; for Best Director Documentary, Fran Strine; and for Audience Choice Award.

Also of note was a Best Student Film from IAA student Shirley Sui, “Please,” written, directed and produced by Sui.

Houston said of the awards and the purpose of the festival, “We give out a lot of awards to encourage young filmmakers. That’s the purpose of the festival — to encourage them to continue to hone their craft. Making a film is difficult. Getting any film made is an accomplishment. In addition to the major category awards, we give out excellence awards for films of demonstrated quality and merit, and Indie Spirit awards to spur filmmakers to continue to make films.”

Houston also said the mission of IIFC Founder and Director Stephen Savage and all production staff is to continue to improve the festival and make it more responsive to the filmmakers’ needs and the needs of the people and businesses of Idyllwild. “I want to meet as many people as I can and make this festival work for them,” said Houston. All 2017 awards are available on the IIFC site at http://www.idyllwildcinemafest.com/.