A couple of Saturdays ago, Jack drove to Menifee to buy a trailer for hauling newspapers up from the desert. The newspapers put too much strain on his Subaru Forester’s weight capacity. The trailer relieves this.

I stayed on the Hill but not, as I usually might, at home. I got dressed and drove out to Pinyon to meet Bob Ferguson and his wife at his art studio. I expected an expansive property for this fine artist but it was beautifully humble, as the couple are themselves.

Bob restored the 100-year-old home and its Cattleman’s Bunkhouse (right), as well as cleaned the grounds and planted beautiful natural vegetation. 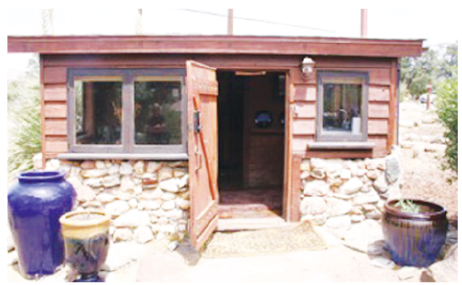 The views, especially of the Santa Rosas, are breathtaking. His wife told me she returns there from San Diego and finds outside in the evening — many times with its clear skies, bright stars and quietness — stunning.

It is no wonder that some people love to live in the high desert. Bob often paints in the outdoors, taking days to craft an impressionistic, plein-air piece.

The studio also houses, in all its simpleness, the couple. Bob added skylights, releasing the darkness and bringing much light into the studio and part-time home.

I eased my way back on Highway 74 headed back toward Paradise Corners, considering whether to stop at the cafe for lunch or stop by my daughter’s house in Thomas Mountain Village. I came around the curve and glanced over to the left at the cafe. The place was packed.

I tried to see if a band was playing but then thought better of peering that way again, considering this was the 74/371 intersection on a Saturday and doing so is risky. I already had experienced a potential head-on with a motorcycle crossing double-yellow lines to pass an RV on my way out to Pinyon.

As I looked back at the highway, I saw some hitchhikers up ahead. There were two PCT hikers, I thought. I may have missed them if I hadn’t looked back in front of me.

Barely having enough time to pull over at the next dirt turn-out, I flipped on the right turn signal and eased in. In the rearview mirror, I saw three people headed my way.

Uh oh, I remembered. My car was packed with crap — odds and ends from both home and work. Cleaning it out has been a priority but getting around to it hasn’t been.

The lady from Washington and the couple from Canada didn’t care. They had been on the trail for two weeks and would ride on the top of the car if they had to.

Packs, people and trekking poles stuffed comfortably in the crannies of my car and we were off.

For the next 30 minutes or so, the four of us enjoyed wonderful talks about trail life and Idyllwild life.

I took them to the state park so they knew where it was. We stopped off at Nomad Ventures to pick up PCT discount brochures. Then we stopped at the post office where we parted company.

I parked my car to check my mail. They were hooking up with other PCT hiker friends when I heard one of them say, “We got a ride with Becky who owns the Town Crier. We couldn’t have had a better tour guide.” I realized I had never asked their names.