The American Legion Post 800 in Idyllwild got started in the 1940s. Back then, its building on Marian View Drive was a Kiwanis Club — you can still see the “Circle and K” symbol on the west face of the building.

The Legion bought it from Kiwanis in early 1971.

Tom Pierce, an Army veteran and the Post’s 2nd vice commander, was a wee lad in the ’40s. He recollects more recent times: hours folk spent socializing on the deck, nestled among the giant cedars and sugar pine trees, and the Thanksgiving dinners he shared with neighbors, family and friends.

This Thanksgiving, Pierce and fellow Legionnaires made sure almost 250 people had a good dinner and for free, as a part of their commitment to veterans, families and the whole community. Marlene, his wife, cooked one of the 22 turkeys served.

Their community-mindedness and giving spirits are hallmarks of Legionnaires, men and women who earned the distinction, in part, through an Act of Congress and their active-duty service during a military conflict and subsequent honorable discharge.

But despite the 70-plus years that Post 800 has been in the business of giving, Pierce, an avid picture-taker, likes to tell the story of how the Legion got its new roof.

“There was no formal asking or anything like that,” he said, “but we casually put out feelers in the community that the Post’s leaky roof urgently needed to be replaced.

“Several people got word and responded with anonymous donations. Our Auxiliary and the Sons of Legionnaires donated, too. Altogether, we raised around $21,000, including the proceeds of special events and member dues. 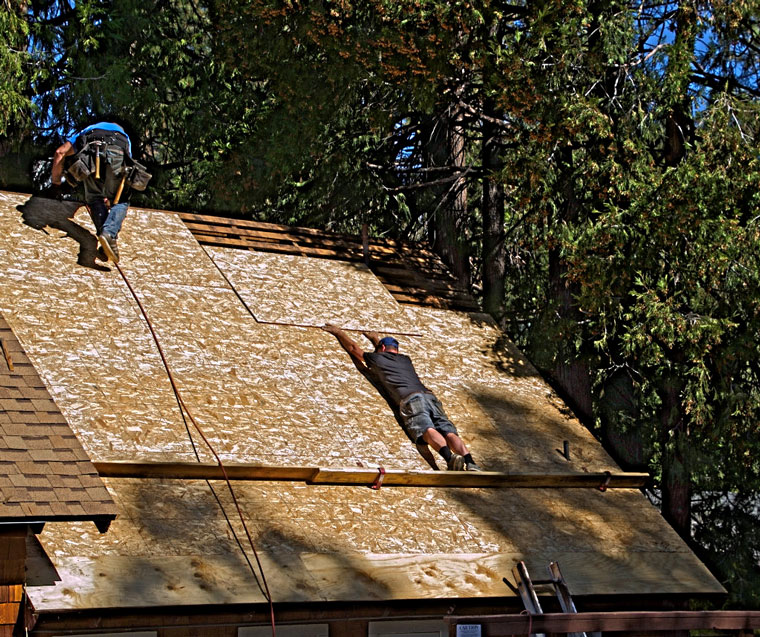 “We couldn’t be more grateful for the help. The leaks had compromised everything and the ceiling had started looking seedy and bad, like it was going to fall down on somebody’s head.”

Air Force Veteran and Legionnaire Alan Belanger agreed in so many words. He helped stanch the flow “for about three years. I bought a tarp and patched the roof.”

The vintage helmets, medals and canteens — the “Post 800 Honor Wall,” draped in black flags paying respect to recently deceased Legionnaires — all of that is safe from many a San Jacinto Mountain storm to come.

Pierce said, “We scraped to get the money, but got the job done this October, quite some time after we created our roof budget in 2016.

“The ‘Army Green’ shingles are fantastic and will last 30 to 40 years,” he added, with a grin fellow Legionnaires appreciate.

“But there were still surprises since we had put the job off for so long. When our contractor, Jesse Wilkerson of Ridgeline Roofing, got started, he found four layers of roofing dating back to the time of the Second World War. The bottom layer was shake shingles, which are a fire hazard and illegal nowadays.”

“We’re thrilled to have the new roof, but we’re still looking for about $3,200 to pay for tearing off those layers and putting plywood down to cover the gaps between the boards that were underneath the shake shingles Jesse stripped off.

“And a lot of the original vents and ducts, especially in the kitchen, had to be rebuilt. All of that ran up the bill and ‘tore through’ our original $21,000 budget.”

When asked how he felt about the new roof, Belanger expressed satisfaction. He sat in the Hall working on Legion business Saturday after Thanksgiving, a few hours before Karaoke would start. He escorted the Town Crier reporter through the bar and pointed to a photo of Danny Richardson, the Post’s commander. Several veterans sat, drinking beers on the deck overlooking the horseshoe pits in the backyard.

A more serene place in Idyllwild on this busy holiday weekend — with thousands of visitors awaiting the annual Christmas tree lighting — couldn’t have been found or imagined.

A moment later, standing on the deck, the newspaper reporter could see the “old lumber” and feel it “wobble” under foot, just like Pierce had said, but he’d also shared more good news: “The Legion was going to get a new deck.

“Post members went down and met with Home Depot officials and they came up to take a look and said it would do the job ‘gratis.’ They told us, ‘We’ll make it right, period.’”

The deck is “structurally sound,” Pierce said, sounding like the engineer he is, “but they’ll bring it up to code and put on new plastic products and we’ll end up with a new deck.

“They’re going to expand it around out front, too, and they’re talking about taking care of the shake shingles on the front of the building, but I haven’t heard a commitment on that.”

Pierce estimated the cost would be “in the neighborhood of $50,000.”

The timeline for the new deck is undecided. “That’s up to Home Depot,” he said. “At our next board meeting, we’ll talk about getting in touch with them again, if someone hasn’t already.

“We’ll stay active — me, the commander, Barney Brause, Jim Wiley and others — to see the project through to completion.”

As the story drew to a close, Pierce exclaimed: “What an honor for us to have the support of the community and Home Depot.

“We want the public to know they can come to the Legion when there is heavy snow and people are isolated or ‘down and out,’ or when they’ve lost heat or the power in their house.

“They have a warm place to go. They can get fed. They can come to the Legion and expect to be accommodated. Please come and visit us soon.”

Debra A. Varnado is the newest addition to the Town Crier’s reporting staff. She has plenty of experience, including starting her own paper in 2007. Since 1999, she and her husband have had a cabin here, where their two boys learned a lot about life on the Hill. They moved to Idyllwild full-time in May 2017. Since then she organized the French Film Festival, which was last month and began writing for the Town Crier in November.

“I enjoyed everyone I met and loved talking to them. I’m concerned that I don’t know a lot of people and they don’t know me, but I’ll cross that border in the future. I’m used to that,” she said after submitting this story.