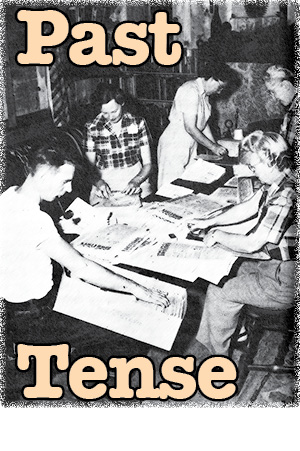 The Town Crier noted evidence that the dog population was getting out of hand: “Many pets are apparently dissatisfied with their homes and prefer just to hang around the post office.”

County Civil Defense Coordinator Col. O.S. Dresher told a Town Hall audience that the community would not be used as a refugee center for city dwellers in the event of an atomic attack or invasion.

The Idyllwild Arts Foundation was inviting donations to help build a swimming pool on campus.

A light rain settled the dust in town, but the season’s moisture total amounted to only 11.32 inches.

An earthquake of 6.5 magnitude rocked the Hill, but only minor damage was reported in Idyllwild and Pine Cove.

The first meeting was held of a group of women planning to form a local chapter of the Soroptimist International Association.

A 147-foot pine tree on Tahquitz Drive was declared a public hazard and was cut down by Mike Pearson, owner of Pearson’s Wood Service in Mountain Center.

Because of changes made in General Telephone’s equipment in Idyllwild, Hill residents would be able to have a choice of long-distance telephone service providers.

Plans were being made for the fourth-annual Timber Festival sponsored by the Lions Club and held at Idyllwild County Park. One of the competitions would be the greased pole climb.

Local resident Conor O’Farrell starred in the HBO mini-series, “From the Earth to the Moon,” which told the story of space missions that led to the United States putting a man on the Moon. He could be seen in episodes one, five and eight.

Elizabeth Monson of Pine Cove, in support of her Jewish faith and culture, spent three weeks of her vacation volunteering in the Israeli Army.

Mayor Max, Idyllwild’s first mayor, passed away in his sleep Tuesday night, April 2. The mayor (a golden retriever) was 12 years old and had had health problems for several years, according to his chief of staff, Phyllis Mueller.