Air quality in Riverside County is abysmal, and nearly the same for the rest of Southern California, according to the latest “State of The Air” 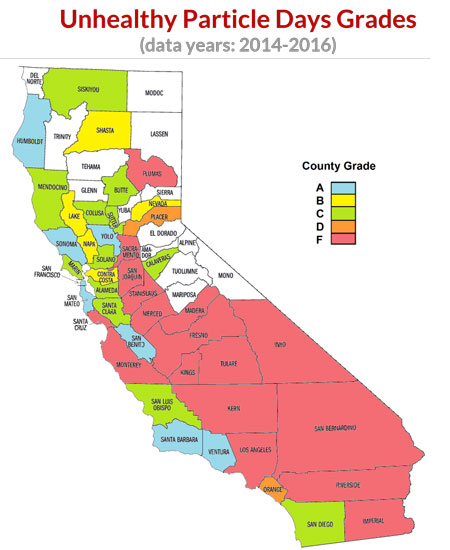 from the American Lung Association in California.

“Riverside County is located in the Los Angeles-Long Beach metro region which made the national top 10 list for worst air quality in the country when it comes to ozone and particle pollution,” wrote Corie Goldman of the Association.

Overall, since 2000, the average number of ozone days in Southern California has been on a consistent decline from 230 to 146 in 2018. Riverside County suffered 122 ozone days.

Southern California suffered four more ozone days in 2018 than 2017 and the report said, “This year’s report reveals that ozone levels rose due to some of the warmest temperatures on record in 2016. Extreme heat and other climate-driven events have a direct impact on our air quality.”

Of the top ten cities with the most ozone days, eight were in California, including the top seven. Los Angeles-Long Beach, which includes the Inland Empire, was at the top of the list. Only two of the ten were elsewhere in country. The tenth worse city was New York.

According to the report, the transportation vehicles contribute the most chemicals to the creation of ozone days.

The actual air quality monitoring data for the ‘‘2018 Report” was collected in 2014-2016. So the effect on air quality from numerous wildfires in 2017 will be included in next year’s report.