According to the California Office of Statewide Health Planning and Development, Idyllwild-Pine Cove’s low-income residents travel an hour to the nearest doctor for primary healthcare.

“There are no providers in that area accepting Medicaid or that have a Sliding Fee Scale, according to our survey from 2016,” OSHPD staff Andrew DiLuccia said. “The ratio of population to physicians is … 4,595-to-0. The full-time equivalent of providers for [the] low-income [population] is … zero.

“The number 4,595 is not the actual [total] civilian population living in the area,” DiLuccia added, “but the number of people living at or below 200 percent of the Federal Poverty Level. Since the HPSA is based on that population, that’s the count we use.”

The civilian population is 12,033 and the service area includes Idyllwild and Pine Cove, Mountain Center, Aguanga, and Anza.

The federal Health Resources and Services Administration designated the Hill a Low-Income Population Health Professional Shortage Area (HPSA), most recently on Oct. 28, 2017, and, subsequently, advertised the designation in the July 2, 2018, Federal Register.

“It’s official once it is in the Federal Register,” DiLuccia added. “Our records go to 2008 and [the area] has been designated at least since then.”

The higher the HPSA score, the greater the need

OSHPD’s primary care office is responsible for assessing the need for HPSA designations, and making recommendations to the HRSA for HPSA approval.

“A majority of the HPSA designations are initiated by that office with the remaining HPSAs requested by local community associations, county officials, community clinics and individual providers,” DiLuccia said. “The primary care office collects the data, runs an analysis to determine if an area meets the federal criteria … and if so, it recommends the designation to HRSA, which [then] approves it.”

In the 2016 assessment, the Hill was scored for its ratio of population to providers and travel time to the nearest source off the Hill, as well as for its poverty rate under 100 percent of the federal rate, and infant mortality and low birth weight.

“Idyllwild received a total of 15 points out of a possible 25” for its ratio and travel time, DiLuccia said. “The Hill’s percent of the population below 100 percent of the federal poverty level was too low for any points, and infant mortality and low birth weight were not high enough for points. “The higher the HPSA score, the greater the need is for providers in the area.”

How many doctors are needed?

According to DiLuccia, “The degree of shortage is 1.53 and does not represent the actual supply of physicians in the area. If the full-time equivalent of 1.53 providers treating Medicaid came into the area, then Idyllwild-Pine Cove would no longer be a HPSA when OSHPD reviews it in three years.

“One FTE equals 40 hours per week. The number of doctors can equate to 1.5 full-time physicians — or 10 doctors or two doctors working 1.53 FTE.

“For primary care, the FTE [counts] only primary-care physicians or family medicine, internal medicine, pediatricians and ob-gyns who are in an outpatient setting.

“Physicians assistants, nurse practitioners and registered nurses are not included in the count of provider data. They are not taken into account when determining the shortage. OSHPD does not collect data on them. The decision for which provider types to count is in federal regulation developed in the early 1980s.

Lake Arrowhead in San Bernardino County, for example, is a low-income population HPSA with a score of 14 and an FTE of 0.846 primary-care physicians. It was designated most recently in June 2017.

The Kaiser Family Foundation reports that about 7,200 HPSAs exist in the country, designated based upon geographic areas, population groups and facilities with shortages. Six-hundred-forty HPSAs are located in California. More than 1,400 primary-care physicians are needed in the state to remove the designations.

In June and July, Patricia James, a primary-care physician in Palm Desert, looked into setting up a practice on the Hill, but ultimately decided against it. Speaking on her behalf, Office Manager Michelle Espejo said, “A lot of people [in Idyllwild] are elderly and it is hard for them to get to Palm Desert.

“She thought it would be good to bring additional healthcare [to Idyllwild] to help the patients, to provide other services and more urgent type care services for them, so they wouldn’t have to come here to Palm Desert.

“Dr. James is attached to the community, loves Idyllwild and has a home here. We were going to go there, but there is nowhere for us to open an office. There’s not a lot of real estate available… So, we are not going to be able to go there.”

Providing care on the Hill for Medicaid or sliding-fee-scale individuals is problematic in terms of the potential economic viability of the medical practice.

“Idyllwild-Pine Cove is not big enough in its own right nor near enough to some place bigger to provide convenient access to affordable healthcare to the people who live there, including emergency, urgent, primary care, gynecology, obstetrics, pediatrics and family medicine,” Paul Lyons, M.D., said.

The senior associate dean for education and chair of the Department of Family Medicine at the University of California, Riverside, School of Medicine said, “Idyllwild-Pine Cove is a very nice example of the challenge that a lot of regions have.

“In theory, a region with 5,000 people could support about two to three primary-care physicians full-time. In terms of the number of people that they can take care of, one physician can take care of about 2,000 human beings.

“However, because of insurance and payment options, you actually need a larger population than that in order to make it economically viable for a physician to practice in any given area. In general, 5,000 to 6,000 people don’t generate enough sub-specialty care for a system to put a physician out there either …

“And [that number] would not support a hospital — especially in California where the cost of building one is higher than in other places in the country. Six-thousand people will not generate a lot of hospital business.

Alternative solution greater than what we have?

Attorney Hodge Crabtree probably would find common-ground with Lyons regarding his assessment of the viability of a hospital in Idyllwild. “The communities of Idyllwild, Pine Cove and Mountain Center cannot support a ‘real hospital,’” he told the Town Crier in a June 28 email. “But [there] should be an alternative solution greater than what we have.

Despite his family’s historic ties to the Hill, Crabtree said, “My wife is scared to spend much time up here fearing some type of medical emergency and being away from a hospital.”

In addition to medical services provided by the Fern Creek Medical Center and the Idyllwild Health Center, the Idyllwild Fire Protection District and Riverside County’s American Medical Response provide paramedic services and transport off the Hill.

“The paramedics are good,” Crabtree said, but he wondered: “Do we need to go a step further… maybe something between a doctor’s office and emergency care?”

The next article in the series will continue to research healthcare on the Hill, access and options to expand access. The Town Crier invites community members to send ideas and comments. Email [email protected] 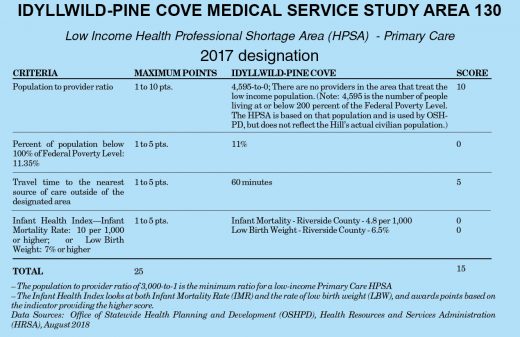