Water rates will increase with conservation

The new policy defined five water-emergency stages (see accompanying table), customer responsibilities to conserve water during the various stages, and the authority to raise water rates during the three most stringent stages as water usage declines.

For several months, the board has discussed and debated the district’s water status. Fern Valley is in Stage 1, essentially voluntary conservation. Pine Cove Water District is in a Stage 2 water emergency, which requires some mandatory conservation efforts, such as limiting outdoor irrigation, car washing and swimming-pool filling.

Only in October did IWD decide to enter water emergency Stage 1. The new Ordinance (66) replaces the current water-shortage policy (Ordinance 64). The full ordinance may be read in the Public Notices section, starting on page A7.

General Manager Jack Hoagland did praise IWD customers for their careful use of water.

“Our customers are pretty efficient. The highest usage was 285 gallons per minute in January 2001,” he said. “It has not been greater than 250 gpm in more than a decade.”

The principal criterion for determining in which stage IWD will be is called the district’s Basic Capacity Ratio. This is simply the prior month’s water usage divided by the district’s supply capacity.

Hoagland provided the ratio for the past five months as an example. In July, the water demand (usage) was 236 gpm and the capacity was 427 gpm. The demand was 55 percent of the district’s capacity. In October, demand fell to 173 gpm and capacity was 420 gpm for a ratio of 41 percent.

This ratio will trigger the various stages. When it is less than 50 percent, IWD will be in Stage 1, unless there are other circumstances requiring a different stage. Sue Nash, an Idyllwild resident, raised this question in the meeting and urged the board not to rely solely on its usage and supply.

“I’m concerned about running out of water. The board should not rely solely on financial criteria. It’s important to use other criteria,” she said.

As the demand increases, the district will shift to a higher stage. For example, if demand or usage exceeds 50 percent of capacity, Stage 2 can be triggered. Stage 3 will be entered when the ratio of usage to capacity exceeds 60 percent. Stage 5 will be applied when usage is greater than 86 percent of IWD water capacity.

As IWD moves into higher water-shortage stages and requests greater water conservation from its customers, usage will decline. To avoid the traditional problem of falling revenue with greater conservation, the board adopted new water rates for stages 2 through 5.

Hoagland stressed that as customers do reduce usage, their actual bills will not increase. Rather, with the higher rates, they will be paying more for the water that is used.

At least two people came to the meeting to speak to this issue, but left before speaking. The board chose to have a closed session as the first agenda item. While waiting outside for the public portion of the meeting to resume, the two people decided to leave since it was not clear how long the wait would be.

These rates were proposed and evaluated in the comprehensive rate study, which NBS conducted for the district in the spring. This study was the basis for the new rate structure adopted in June.

During the discussion of the ordinance, Hoagland said there are three wells that will be added to the distribution system within the next year. These could add about 30 to 40 gpm to the district’s capacity, which would lower the BCR, if usage remains about the same.

The notices sent to ratepayers allowed them to submit a protest form to the board in advance of the public hearing. Hoagland said 835 forms would have to be returned in order to stop the approval of the water-shortage rate structure.

Before the board voted on Ordinance 66, Hoagland open the sealed box and counted 29 protests, only 1.75 percent of the qualified customers.

After a motion from Director Peter Szabadi to adopt the new ordinance, the board voted unanimously in favor of the new water shortage policy and rates. 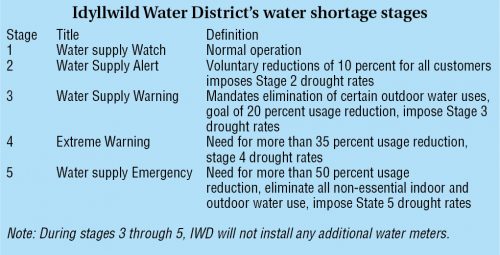