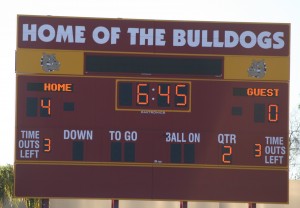 Hemet took a 1-0 in the first half and kept it until mid-way through the second half. Hemet’s front line speed continued to pressure the La Canada defense. Then within a span of five minutes, Hemet scored two more goals for a 3-0 lead.

The final goal was scored with slightly less than seven minutes remaining in the game.

“I love a shutout,” Coach Craig Dwinnell said after the game. “We only gave up 10 goals all season.” Complimenting his defense, he also paid a special compliment to Savanah Loutzenhiser, of Idyllwild.

“Savanah is excellent. She is so strong back there,” he said. “She part of a dominating defense.

Although Hemet’s Girls Soccer team went to the CIF-SS semi-finals in 2011, Dwinnell emphasized that this year’s team has eight different starters. He also noticed a difference in the two playoff games this week and the team’s regular season performance.

In both games, Hemet essentially dominated the second half and went on a scoring spree — five goals in Tuesday’s game against Garden Grove and three in Friday’s against La Canada. During the league season, Dwinnell noted that the team normally jumped to first half leads.

The semi-final opponent, South Pasadena, which is from the same league, Rio Hondo, as La Canada. South Pasadena was ranked number four in Division 6 at the end of the season.

The top four ranked teams in Division 6 all made it to the semi-finals. Hemet is ranked number one. The San Dimas and St. Margaret’s are playing in the other semi-final game. They are two and three respectively.

Bulldogs best Tigers, on to finals