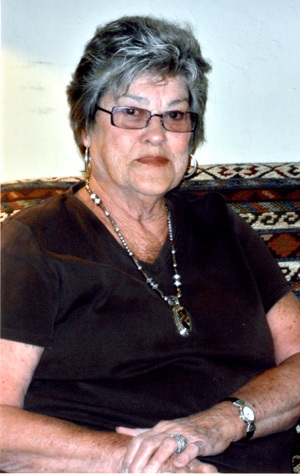 Judith Emery Hermanson, teacher, artist, wife and mother, was born in Lawrence, Mass. As the daughter of Colonel Harry R. and Evelyn Smith, Judi, an Air Force “brat” reared in a strict military family, moved around the country every three years. In her teenage years she attended Military Dependents School in Wiesbaden, Germany, and witnessed the misery of that country following WWII. The family returned to the U.S. in 1949, and, in 1952, Judi graduated from Washington & Lee High School in Arlington, Va.

After later graduating from Mary Washington College, an all women’s college in Fredericksburg, Va., Judi taught for one year in San Bernardino, Calif., before being hired by San Diego City Schools. During the next few years, Judi and fellow classmates Hermie (also a military brat and daughter of a Navy surgeon), Barbara, and Corky lived on the beach of Mission Bay, and later La Jolla, in San Diego. This was a time of skin diving, bongo drums, the Kingston Trio and constant fun, when La Jolla was still a “village.” In 1959, Judi and David Hermanson, whom she met while teaching at Mission Bay High School, were married at Norton Air Force Base where Judi’s father was the commanding officer. The first years of marriage found Judi and Dave living in La Jolla, driving their favorite cars, a convertible MG and an Austin Healy. They later moved and made their home in Point Loma.

During the 30 years that she worked for San Diego City Schools, Judi taught many aspiring young art students at Mission Bay High School, Claremont High School, and Twain Alternative High School. In addition, Judi taught art classes for the San Diego Gifted Program and worked for the San Diego Community College District teaching adult art classes and high school GED classes. During her career, Judi took graduate classes at UCSD, San Diego State, and UCR and was awarded Mentor Teacher by the State of California and Excel Teacher by the SDUSD. Judi also was one of the founding patrons of the Art Alliance of Idyllwild and contributor to the Idyllwild Arts Academy.

Over the years, Judi and Dave traveled extensively to Mexico, Asia, Europe and Africa, with Egypt being their favorite. In the early 1970s, a friend introduced the Hermansons to Idyllwild and a few years later they purchased a charming “fixer upper” in Fern Valley where they spent many wonderful summers and holidays “on the Hill.” In 1996, Judi and Dave became full-time residents. Prior to Dave’s death in 2001, the couple developed an art studio in their home with supplies for a lifetime. Thereafter, Judi pursued her passions in poetry, watercolor, photography, oil, charcoal, acrylic, embroidery and designing and making jewelry. Most of her larger works reflect an interest in pursuing the relationship between nature and spirit.

During Judi’s teaching years, she taught mental projection and encouraged students to never become slaves to detail, but rather to delve into the ideas and emotions of each individual. In doing so, Judi became a teacher-counselor, allowing students to express themselves more freely. After her husband’s death, Judi became especially interested in ravens and started incorporating them into her art stating: “Whatever I paint, or photograph, or weave, it must have a passage of spirit, an interaction of life, a moment of spiritual connection.”

Judi was also a collector of Southwestern tribal art and jewelry. During her pastime, she was a voracious reader and championed a conservative political stance, a rarity in the generally liberal art community. Judi was a lifelong animal lover and for the last ten years of her life was especially fond of Heidi, her German Shepherd who could be seen with her riding around the village in the backseat of her Jeep.

More recently, some of Judi’s moments to celebrate included the birth of two new granddaughters, her brother and sister-in-law’s purchase of a second home in Idyllwild, and accompanying her youngest brother Stephen to New York for the Explorers Club Centennial Dinner at the Waldorf-Astoria to meet with Sir Edmund Hillary, mountaineer, explorer, writer, and humanitarian. One of Judi’s concerns was that there are no towering personalities to inspire children and adults today. As a young teenager she had a family dinner with the shy Charles Lindbergh. Judi mused, “Where are these people today? Today’s youth are living life vicariously through TV reality shows and computers and not enjoying it first hand.”

Judi chose to live in Idyllwild for its “village charm” and beauty. She was attracted to the rugged individualism and colorful independence of living in the mountains and especially the people it attracted — the next door neighbor who cared and reached out, the friendships at the local cafe, the hairdresser and friend who minded the cabin while she was traveling abroad, the kindness of the post office personnel and the local market people who called when she was sick. Each became a treasured friend over the years. Those who knew Judi knew she protected and celebrated people’s privacy and diversities. In Judi’s art studio, there is a poster that she proudly displayed entitled “Women Who Run with the Wolves,” by Clarissa Pinkola Estes, which states: “A healthy woman is much like a wolf — robust, inventive, loyal, fierce.” Judi was all those things to those who knew her. She was one of a kind and will be forever missed but never forgotten. Judi had one last message for her friends and family, a poem by Colleen Hitchcock:

And if I go,
while you’re still here …
Know that I live on,
vibrating to a different measure
— behind a thin veil you cannot see through.
You will not see me,
So you must have faith.
I will wait for the time when we can soar together again
— both aware of each other.
Until then, live your life to its fullest.
And when you need me,
Just whisper my name in your heart,
... I will be there.

Judi is survived by her daughter, Marden E. Hermanson; son, David P. Hermanson; brother, Russell and his wife Donna of Walnut, Calif.; brother, Stephen E. Smith of Walnut Creek, Calif.; five granddaughters, Caitlin, Natalie, Tara, Clare and Lotta; and niece Shannon Kavanagh, her husband Brian and their children Jake and Paige. A private celebration of life is pending. No services are scheduled. Donations in her name can be made to: ARF-Idyllwild Animal Rescue Friends. ARF is an official 501(c)(3) nonprofit organization (website: idyllwildarf.org).