Town Hall Sports Coordinator Jeremy Teeguarden reported on youth basketball for both the College League (kindergarten through third-grade) and the Pro League (third- through sixth-grade) for the week of Dec. 10.

The first game was between the Gastrognome Broncos and the Pacific Slope Tree Co. Bulldogs. From the opening tip-off, the game was close. The teams played great defense and traded baskets. The Bulldogs led 6-4 at halftime as Reese Whitney scored all four points for the Broncos, who fought back in the second half as Layton Teeguarden scored four of his six points. The Bulldogs broke a 10-10 tie late in the game and held on to win the game 12-10.

The second game saw the Wooley’s Wildcats meet the Blue Bird Inn Jayhawks. Cody Fogle played great, scoring 12 points to lead the Wildcats. Breanna Sheppard led the shorthanded Jayhawks with five points. The Wildcats pulled away in the second quarter and went on to win 16-5.

Thursday night, Dec. 13, the Town Crier Cavs took on the Suburban Heat in the first game of the season for the Pro League (grades 3 through 6). The game was a defensive battle at the beginning as the Heat were held to five points while holding the Cavs scoreless in the first half. The Cavs opened the second half scoring on their first possession and didn’t look back. Shelby Reed scored four points for the Cavs as they tied the game at the end of the third quarter. Zach Gray played outstanding defense for the Heat the entire game but the Cavs kept rolling in the fourth quarter and went on to win 14-8.

The second game Thursday pitted the Idyllwild Arts Clippers and the Fairway Market Lakers. The Clippers jumped out to an early lead as Fernando Garcia scored all six of his points in the first quarter. The Lakers stayed close in the first half and then broke the game open in the second half as Stephan Carman scored 5 points in the third quarter. The Lakers went on to win 23-16.

On Friday night, the first Pro League game was between the Fairway Market Lakers and the Suburban Heat. The Heat played great defense the whole game and Jake Mabery, with 22 points, scored almost at will, including a half-court shot at the buzzer to end the third quarter. The Heat had the lead the whole game but the Lakers stayed close and trailed by just a basket with seconds left. Isaiah Carmen got a rebound and put it back in as the buzzer went off to tie the game. The teams traded a basket in the first overtime and then neither team scored in the second overtime as the teams ended in a tie, 25-25.

Teams can play two overtimes and then the game must be stopped because there are other games scheduled immediately after.

The last game of the night matched the Town Crier Cavs and the Idyllwild Arts Clippers. The Clippers ran out to an early lead as Chayton Kenyon scored four of his 11 points in the first quarter. Ben Tiso scored eight points in the game including four in the second quarter to tie the game at halftime. The teams stayed close the whole game but the Clippers got a couple of key baskets toward the end and held on to win 20-16.

On Monday Dec. 10, Idyllwild Garage played Idyllwild Inn. These two teams have combined to win the past five championships.

Idyllwild Garage jumped out early as Kirsten Torrez had some terrific bumps to help her team win the first two games. Idyllwild Inn won the third game with some great setting from Misty Hitchcock. Then the Garage recovered and won the next game and the match (25-19, 25-16, 22-25, 25-18).

Tuesday’s game was between the Red Kettle and Silver Pines Lodge. Silver Pines, the more experienced team, led the whole way as Julie Fogle played great. Bo Dagnell hit well for the Red Kettle, but Silver Pines was too tough and won the match in three games (25-16, 25-19, 25-18).

The club held its regular monthly tournament on the Morongo Tukwet Canyon Legends Course in Beaumont While Idyllwild was hidden under its first snowfall of the year, clouds and cold winds were the rule of the day in Beaumont, where temperatures were in the chilly 40s.

The course was wet from recent rains, but otherwise in good shape.

In the four closest-to-the-pin contests, John LoGiudice won on holes number 4 and 12, Bruce Marley won on hole 8, and Leong won on hole 17.

On another note, 2011-12 club champion Chuck Alkire, who was scheduled to play in the Southern California Tournament of Club Champions on Dec. 10, couldn’t make it because he suffered semi-minor injuries in an off-road accident. 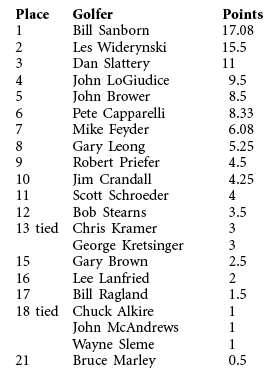 The top eight-point finishers of the year go into match-play playoffs for the club championship in August, September and October. A member has to compete in at least five regular season tournaments and have a handicap no greater than 24.4 in order to qualify for the playoffs.