Hooray and paws up to Dozer, our Lab-mix, who has a new home minutes from the beach, and a new name — Luigi.

Chelsea is looking for her forever home to do her favorite thing — sit on her bed and just look pretty. This senior gal has a gorgeous coat with a tail to match. She is a shepherd mix, quiet and shy at first. Chelsea loves to go for short walks, have a treat or two, and look pretty. She is good with other dogs and has no known health issues. And her birthday is just around the corner. Chelsea will be 10 years old Feb. 11. Her wish is to have her own quiet home for the rest of her life. 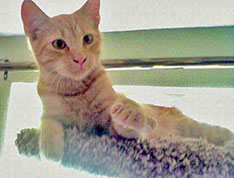 Boomer just can’t believe he has lived at ARF for almost a whole year now. His birthday is Feb. 27, and even though he will be a year old, he still is a playful, mischievous kitty. He has bravely said goodbye to his brothers and sisters, and being the youngest of the cattery, has had to take matters into his own paws. So flipping the cat toys up in the air, scrambling to catch them, and tossing them across the room keeps him busy. Let’s give Boomer his birthday wish to have his very own home and human.

Yep, I’m Scrappy Doo, and it’s a good thing, because a human abandoned me in the ARF yard one chilly day.

So I had to learn really fast how to be a scrapper. I am a 1-year-old male Papillion/long-haired Chihuahua-mix weighing in at only 8 pounds. That doesn’t stop me from playing with my favorite friend at the ARF house, Harley Dog, who, by the way, weighs in at 82.
We play tug-of-war with the rope, which means I get drug around the room. But I won’t let go. Harley always shares his food bowl with me and doesn’t even mind when I climb on his back for a ride. Harley was found with eye and head injuries, and no one ever called for him. So he is just like me, abandoned, but happy we are at ARF.

Harley absolutely loves the feline crowd, but Scrappy Doo wants nothing to do with them.

ARF has many cats and dogs available for adoption or fostering. Go to www.arfidyllwild.weebly.com and click on Petfinder. All pets are spayed, neutered and current on shots. ARF is open from 10 a.m. to 4 p.m. Saturdays and from 10 a.m. to 3 p.m. Sundays.

Creature corner is sponsored In Memory of Fluffy. To sponsor the column, call Lisa Streeter at the Town Crier, 951-659-2145.