The registrar also released votes for each race from each county precinct. Nearly 54 percent of the state’s voters supported Gov. Jerry Brown compared to only 44 percent of Idyllwild and Pine Cove voters. Countywide his support was slightly less at 41 percent.

Total ballots cast in the county were 198,102, representing a turnout of 22.3 percent. Statewide, almost 4.3 million people cast votes in the primary election which represents 24.4 percent of all registered voters.

Hill voters continued to exercise their civic duty in greater proportion than the rest of the county. Turnout in Pine Cove was 42 percent and slightly more than 38 percent of voters cast ballots in both Idyllwild and Garner Valley.

In the state Senate District 28 race, Hill voters strongly favored Stone more than the other five candidates. He polled nearly twice the percentage here than he did throughout the district (40 percent compared to 22 percent).

The second most popular candidate on the Hill was Democrat Anna Nevenic, who claimed nearly 20 percent of the votes in Idyllwild and Pine Cove, whereas she finished fifth overall in the election. Garcia was second in both Garner Valley and Mountain Center. 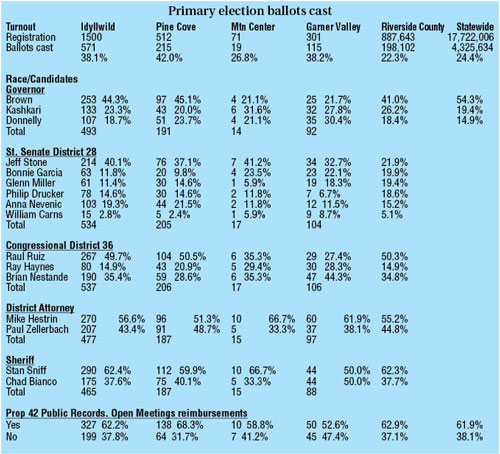