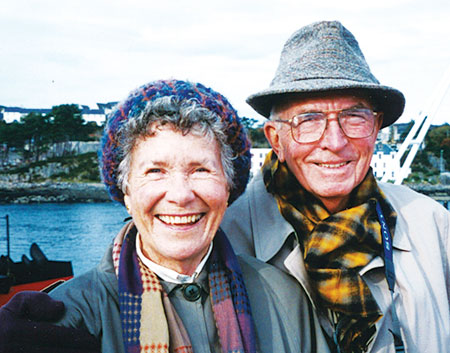 Harry and Mary, both 92, would have celebrated their 69th wedding anniversary this week. Inseparable and devoted to one another, it was fitting that after Mary died Saturday, Oct. 4, 2014, Harry would spend only nine more days with us before he left to join her.

Mary Margaret was born Jan. 27, 1922 to Oliver Sweningsen and Edwine Vignes Sweningsen in Long Beach. At an early age, she developed an affinity for animals, particularly birds, and raised a parrot that amused people with its many human characteristics. Mary graduated from Stanford in 1943 and went on to earn her elementary education teaching certificate. She briefly taught fourth and fifth grades in Long Beach schools but had a lifelong gift for engaging children.

Harry and Mary, having known each other since the third grade, were married in 1945.  The couple moved to the Bay Area when Harry joined the Standard Oil Company of California (Chevron) in fuels and lubricants research in Richmond. His work led him to become co-inventor of detergent additives for gasoline. In 1959 and 1960, the company sent him to Stanford to get an MBA. He rose through management positions in the company to become assistant to the president and spent a total of 38 years with Chevron, mostly in the San Francisco headquarters.

Mary and Harry lived in Orinda for many years where they raised their four children. Mary continued to teach children as a volunteer with her children’s school PTA as well as being active as a Girl Scout leader and Sunday school teacher for many, many years. Harry was active in Boy Scouts as a scoutmaster, and ended his long commitment to scouting by creating and leading an Explorer Post, with the purpose to teach teens to restore antique cars, principally Model A Fords.

Mary’s joyful relationship with Idyllwild began in 1925 when her parents bought a cabin. Every summer, her mother, brother and she moved to Idyllwild while her father commuted on weekends. Her memories and stories of early Idyllwild were vivid and entertaining. After marriage, the summer tradition continued as Harry moved her and their children to the Hill for at least a month each summer.

After retirement in 1983, Harry and Mary moved full-time to the home in Idyllwild Harry had carefully remodeled. Mary was then able to devote full attention to her passions of enjoying this mountain town, befriending birds and entertaining grandchildren. Harry, when not involved in Rotary projects or participating on the IWD board, enjoyed the time to pursue his love of restoring old cars and building small, gasoline-powered vehicles for his grandchildren to drive on the property.

A memorial service is planned for Saturday, Nov. 15, 2014 at Idyllwild Community Church.

In lieu of flowers, the family requests donations be made to Boys Scouts of America or Idyllwild Community Church.