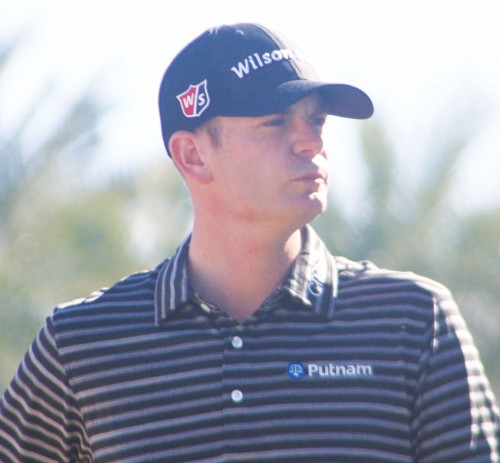 A whole new feeling follows Brendan Steele this year — a sense of belonging you can tell he feels, too. It was there even on the first tee Thursday morning at the Humana Challenge in La Quinta. No more apprehension about the cut; now it’s expectation to be in contention and collect his next win.

The Idyllwild native was 8-under-par on Sunday, blasting back-to-back, bogey-free 32s to finish 21-under-par, posting 67-68-68-64 — 267. He thrilled his gallery on the 12th hole, canning a birdie putt for a share of the lead, and eventually he became the leader in the clubhouse that the others had to chase. Four matched him, and one got one birdie more. Steele earned second place with four others.

It was his finest performance at the Humana since he joined the PGA Tour in 2011. Interviewed afterward, he said he’d been feeling like he could shoot a low score for the last month or so during his off season.

“I‘ve been feeling really, really good shooting good scores at home, and I mean I know that doesn’t always translate, but just seeing a big difference in my game and feeling like there wasn’t really any shot that I couldn’t play … I just needed to get into a tournament as soon as possible.”

Steele was asked about a couple of putts on 14 and 15 that had lipped out for him. He acknowledged they were good putts and that another good putt on the 10th hole also broke across the hole and lipped out. “So there were a few,” he said, shrugging with a big smile, “but I made my share, too, so no complaints.”

Steele said that while you always want to play well, he definitely wanted to do so close to Idyllwild. “I’ve got a lot of friends and family here. It’s really nice to start the year with their support and to actually play well for once. I haven’t really had a good record here, so it’s nice to get it going the right direction.“

Many of the same fans who had walked earlier rounds came back Sunday for the finale. Walking all four rounds with Steele were his wife, Anastassia; his parents, Kent and Jana Steele; André Pilon and Pierrette Filion of Montreal; Hill resident Mike Ogle; and, of course, the Town Crier.

Steele tees it up again this week in the Waste Management Open in Phoenix, where he has played well in recent years. Next week he’ll be back in Southern California for the Farmers Insurance Open at the Torrey Pines course in La Jolla.