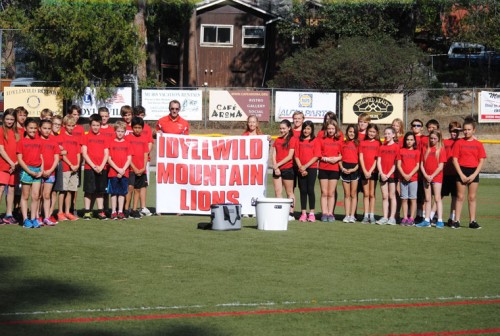 In four years, the Idyllwild Middle School cross-country team has grown from 10 runners to 32, said coach Lee Arnson. He and Misty Hitchcock, both volunteer coaches, have built a thriving sport in Idyllwild that few other Hemet Unified middle schools have.

“Every year, the team is bigger and bigger. It makes it more fun,” Arnson said. “Every kid is different and [we] try to figure out what they need. It’s an introduction to the sport.”

In the past few years, several of Hemet High School’s best long distance runners began in Idyllwild. Recent graduates include Jayden Emerson, Chad Schelly and Tanner Torrez. But they all became interested without the help of organized training locally.

This year, two members of the first Middle School team — Micah Hitchcock at Hemet and Riley Arnson at Palm Desert — are among the region’s elite. Members of this year’s team have those visions, too.

but expects to continue running when he attends Hemet High School. Although Emily enjoys the running and practices, her competitive running may end this year if she achieves her goal of going to Idyllwild Arts Academy.

Idyllwild School has budgeted funds for the bus to take the team to its meets. There are about five each year, but all are off the Hill, according to Arnson, who was grateful for the school’s assistance. The team also has practices three days each week.

“Our first meet was on a Monday and it was raining and cold, but all 32 kids showed up,” Arnson said proudly. “Everyone huddled under an easy-up.”

Runners have to understand their responsibility for completing homework and being prepared. During the course of the season, Arnson and Hitchcock try to instill three messages — responsibility, camaraderie and sportsmanship. “There’s a lot more than just running,” he added.

Several local people have contributed to the team’s expenses. “We’ve been able to pay for all the jerseys,” he said.

This year, several fifth-grade students have joined the team. At meets, they have to compete with the sixth-grade runners. But interest remains high.

“Most of our competition comes from the Temecula, Banning and Beaumont areas and a couple of Hemet schools,” Arnson said.

Future teams will continue to attract runners. Sixth graders Grace McKimson and Mathilda Terry both say they love the sport and plan to continue running.