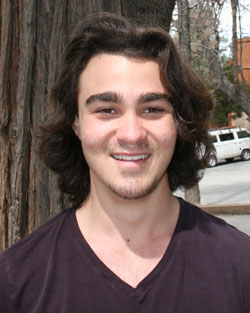 When Arsel Kalemoglu came to Idyllwild Arts Academy four years ago at the age of 14, he spoke little English. A native of Antalya, Turkey, Arsel said he learned English “on the page” in Turkey but had little English conversational skill.

Now his American-accented English is fluent and he is on his way to Berklee College of Music in Boston on scholarship. He has been a jazz student at IAA, playing both alto and tenor sax. Sax teacher Paul Carman observed how much Arsel has grown as an instrumentalist while at IAA. But it is not saxophone Arsel will major in at Berklee, but in the business of music and music engineering.

Arsel’s story is typical of many of the foreign students who come to IAA with little conversational English skill but, through rigorous academic and arts training with supportive faculty, they graduate and attend prestigious colleges and universities throughout the U.S. This year, 32 countries are represented in the IAA student body.

Arsel had studied classical piano in Turkey since he was 5, played flute in orchestra and learned guitar on his own. But his jazz career began when his father and brother decided to learn to play saxophone. Arsel said it changed his life.

“One day my brother and father decided to play sax,” he said. “I was 11. I told them I wanted to play and they said, ‘No, Arsel, you’re too young.’ But eventually, they stopped and I continued to play. I took lessons and also played flute.”

On recommendation of a company that helped Turkish students find schools in the U.S., Arsel and family came to Idyllwild in the summer when he was 13 to look at IAA. “When we saw the school, we all became excited,” he remembered. “My family is very down-to-earth and the beauty of the mountain, this place, the music and the people made a deep impression.

“I could hardly wait until the next year when I could start. I was super-excited. I told everyone I was going to this art school on top of a mountain in California. It was life-changing.”

The first day at IAA was also life-changing. “I was so scared. I had so little English and was so scared to meet Paul [Carman] and Marshall [Hawkins]. The first question Marshall asked me was ‘Do you know Miles Davis?’ I said, ‘No.’ I was so embarrassed. That night I studied and listened to Miles Davis’ music. That was the first night I really got into jazz. I always knew sax would be my instrument. I loved the sound of it. That moment when Marshall asked me about Miles Davis changed everything.”

In his four years at IAA, Arsel has become an excellent sax player, socially adept and a great ensemble member. He is known on campus as a very friendly and supportive guy. He was a member of the winning IAA septet at this year’s Berklee High School Jazz Festival.

This week, he is on his way to Reno, as part of the same IAA septet, to play in the Reno Jazz Festival at the University of Nevada.

This summer, Arsel plans to start in Greece and play sax throughout Europe, wherever the train, his feet, his talent and his smile can take him. “Maybe on the street, maybe in combos, maybe in gigs,” he said. “And I’ll remember every lesson with Paul, where I learned everything I could in each lesson. I am just so grateful to Paul and Marshall and the school.”