Town Hall Sports Coordinator Michael Holato gave this report on Youth Soccer. Below are the scores, standings and players of the game for 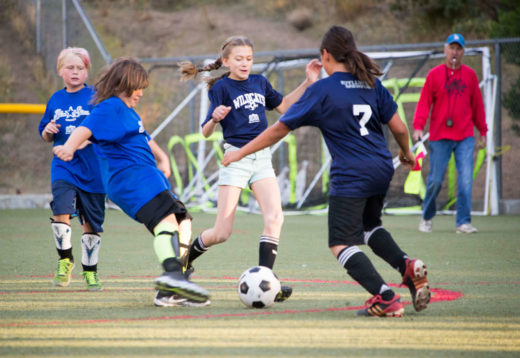 Town Hall Youth Soccer. For the 4 to 6 year olds we are only doing player of the game.

Pacific Slope Tree Dragons 2 Idyllwild Garage Assassins 1. Assassins Goalie Landon Cloud was amazing in the first half of a 0-0 tie. Emily Brosterhous of the Assassins scored the first goal of the game but Dragon Indigo Dagnall scored the next 2 goals for the victory in a well-

played defensive game by both teams. Idyllwild Vacation Cabins Idyllwild Star 1, Crazy Train Pub & Grill Goal Busters 0.  In another close 7- to 9-year-old defensive gem, both Idyllwild Star Goalie Alex Solario and Goal Busters Goalie Finneas Carpenter were awesome in the nets.  Idyllwild Star Salvador Solario scored the only goal in a 1-0 victory. These games are also exciting to watch as this age level is working on developing their soccer skills.

Muir’s Mountain Realty Blue Stars 6, Idyllwild Brewpub Wildcats 3.  Wild Cats  Kilo Reynosa and Eddie Rincon scored goals for a 2-0 Wildcats lead but the Blue Stars came back with 3 goals, 1 from Roman Hanovar and Revin Muir added 2 more for a 3-2 lead.  Eddie scored another goal  for the Wild Cats to tie the score at 3-3, but the Wild Cats scored goals from Travis Rocha, Christian Gonzalez and Chris Cerritos for a 6-3 victory. Muir’s Mountain Blue Stars 4, Idyllwild Brewpub Wild Cats 2. Wildcat Joel White scored the first goal of the game while Goalie Manuel Guzman of the Wildcats was outstanding in the net.  Rene Montoya of the Blue Stars scored 2 goals for a 2-1 lead.  Wildcat Christian scored a goal for a 3-1 lead then Silas Tibo of the Wildcats scored a goal to cut the deficit to 3-2. Revin of the Blue Stars scored the final goal in a 4-2 Blue Stars victory.  Even though the scores don’t indicate the closeness of these games, they can go either way and are exciting.

Fox 3, F.C. Los Huevones 1.  F.C. Los Huevones scored the first goal of the game but Fox scored 3 consecutive goals in a 3-1 victory. The adult games are so fast with non-stop action, they are so fun to watch.