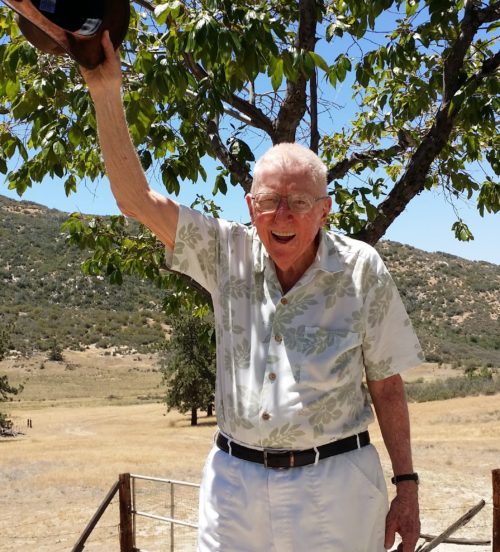 Richard was born in Elgin, Illinois, Feb. 25, 1926. Richard was the eldest of three boys to parents Arthur and Sophie (Dreyer) Miller.

Richard proudly served our nation during World War II, enlisting in the United States Navy in 1943. Richard was initially a landing craft operator in the Pacific Islands and later volunteered as a Navy Frogman with the Underwater Demolition Teams (UDT) (predecessors of the Navy SEALS).

After rigorous training, Richard became a member of UDT-16 where he was nicknamed “Red Dog.” Red Dog and his team were key in the Philippine Liberation Campaign and Battle of Okinawa. Richard was honorably discharged in 1946. Richard also served in the Marine Corps Reserves following the war.

Richard was a painting contractor. Rembrandt (as he was known) painted the homes of many desert community residents of the Coachella Valley and later became a furniture refinishing and repairman.

Richard also spent many years off and on in the small mountain community of Idyllwild where he enjoyed the fresh mountain air and friendly people.

Richard was preceded in death by his brothers Ronald and Howard.

In lieu of flowers the family requests donating, as your heart leads, to a charity for veterans, children or the homeless.

Finally, as Richard would always say, “Be fantastic!”