On Thursday the Idyllwild Heating and Cooling Bobcats took on the La Casita Ravens. Mason Dunn played great for the Bobcats as he went after the ball all game and had some awesome kicks. Travis Rocha had one of his best games for the Ravens as he drove the ball down the field the whole game. 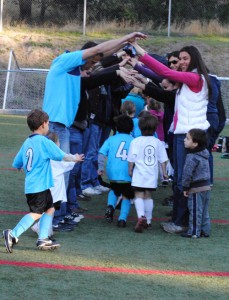 Also on Thursday the American Legion Hurricanes took on the Café Aroma Galaxy. The Hurricanes were aggressive all game and scored a bunch of goals including nice ones by Liliana Sorensen and Revin Muir. Julia Wangler played great for the Galaxy going after the ball and getting some nice kicks.

On Thursday, Sacco Dining Wolverines and the Rotary Green Hornets finished the Majors season. The winner of the game would get the first seed for the playoffs.

Both teams played great all game. The Green Hornets’ Jordan Gates played well on offense and helped give the Hornets a one goal lead late in the game. With just a couple minutes remaining, the Wolverines’ Cody Fogle went around the left side, drove in front of the goal and tapped in the tying goal.

The game ended in a 2-2 tie which gave the Green Hornets first place for the playoffs by a single point.

The Green Hornets finished with 17 points and will play the winner of the playoff game between the Wolverines and the Black Knights. The winner faces the Green Hornets in the championship game on 5 p.m., Thursday Nov. 3.

On Thursday a makeup game was forfeited by the Orange Crush and the Flame Throwers were awarded the win.

On Friday the regular season wrapped up with the Doctor’s Dunn and Dunn Orange Crush taking on the Pacific Slope Tsunami’s. Both teams played great as the game went back and forth. Mei Xing Hunt and Joseph Tiso played great for the Tsunami’s going after the ball and protecting the goal all game. Lanie Wilke played great in goal and Destinee Helsor played solid defense in the second half. Jake Gurling got free in the middle of the field and scored the go ahead goal with one minute to go in the game as the Orange Crush won 4-3.

In a great season, there was no clear favorite in any game. Every game was close and each team battled the other all season. The Flame Throwers earned the first seed for the playoffs and will meet the winner of the playoff game between the Orange Crush and the Tsunami’s in the championship game at 5 p.m. Friday Nov. 4.