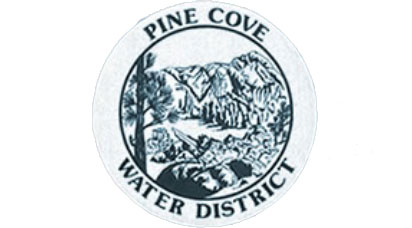 American Tower is replacing Verizon on the new lease. Once formally signed, PCWD will receive a one-time $20,000 signing bonus.
In other business, Holldber told the board that the district’s counsel Brad Neufeld was leaving his current firm, Gresham Savage Nolan & Tilden of San Bernardino, to join a new firm, Varner & Brandt of Riverside. The board unanimously agreed to continue to use Neufeld for legal advice.

“He knows us, knows our business and we like him,” said Director Diana Luther in support of maintaining the relationship with Neufeld.

Because of the move, Neufeld told the board he needed additional time to review the revised Ordinance 4, which establishes basic board operating policies. With the extra time, Board President Robert Hewitt, Holldber and Marge Muir, Pine Cove resident and real estate agent, will meet next week to discuss her comments on the draft ordinance.

While the water loss estimates were not available this month, Holldber expressed gratitude for the district’s efforts to pursue leak detection over the past two years. He attributed this success as one of the reasons that the 2016 October production was the same as 2015 rather than increasing as is occurring throughout the state. He plans to continue the effort in the Pine Ridge Road, Laurel and Nestwa trails neighborhoods.

PCWD is still in the midst of a meter replacement program, more than 100 water meters have been replaced this year. These were older and the most used, greater than one million gallons. The next tier will be addressed this year.

Groundwater well levels were very good in October Holldber told the board. “The static well stayed the same and my wells were up one or two feet. The lower Dutch Flats wells were up 4 feet despite regular pumping this fall.”

He also reported that during the fall and winter he would begin some preparations for next summer. Since the drought may continue, Holldber plans to bring more wells into the distribution system.

In conclusion, the board and Holldber thanked office manager and Board Secretary Becky Smith for 10 years of service.