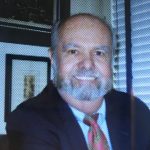 Since 1931, Bob’s grandfather, Robert H. Ferguson, and family have owned a cabin on Strawberry Valley Drive. They enjoyed weekends and holidays in Idyllwild. Bob was on the Idyllwild Library board for many years and helped acquire the new Idyllwild Library.

Bob was an attorney at law and practiced in the fields of complex business and land-use litigation. He also taught, as an Adjunct Professor of Astronomy at the University of La Verne.

He was a member of the Sons of the Revolution, the Scottish Knights Templar, Priory of Robert the Bruce and the Pasadena Opera Guild.

He is survived by his wife Peggy, daughter Shari and son Timothy.

Memorials in memory of Bob may be made to the Mount Wilson Institute, 600 Lincoln Ave., Pasadena, CA 91109.