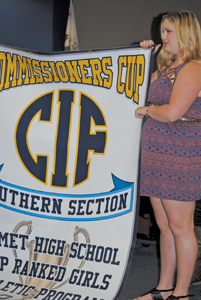 The CIF announced the top 10 girls and boys athletic programs in the 22nd-annual Commissioner’s Cup in June. More than 580 schools — public and private — are CIF members.
Several Idyllwild girls — Danika Hitchcock, Savannah Loutzenhiser and Brianna Williams — were members of the winning volleyball team.

The softball championship was captured during the June 2013 graduation week. Several play-off games overlapped with school functions such as the prom.

This is the first Commissioner’s Cup title in HHS history on either the boys or girls side. The Bulldogs edged out Mater Dei High School of Santa Ana for the top spot as the Monarchs finished as runner-ups by just 2 points.

On the boys side, Loyola High School of Los Angeles claimed their seventh Commissioner Cup title in the past 11 years and their fifth consecutive cup.

The CIF-SS developed this recognition program based on comprehensive excellence in interscholastic competition. The purpose of this program is to enhance the spirit of competition, sportsmanship and goodwill among the student athletes and member schools.