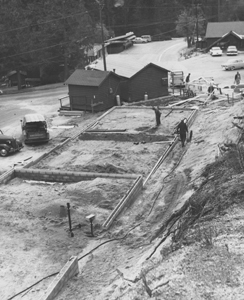 Left: Ground is broken on a location for the new Idyllwild Library sometime in the 1960s at Fern Valley Corners. File photo

65 years ago - 1948
Pine Cove purchased a siren to install at Hoffman’s place. It was to be a means of calling people to the scene in case of emergency.

60 years ago - 1953
In Austria, Harry James was invited for coffee with a Viennese family who were proudly dressed in clothing contributed by Idyllwild citizens.

50 years ago - 1963
The Riverside Mountain Rescue Unit rescued two stranded Marines from Tahquitz Peak in the chilly early morning hours. The men had lashed themselves to the rock during the night so they wouldn’t fall off.

45 years ago - 1968
The new Idyllwild Historical Society held its first open meeting and invited everyone to attend.

30 years ago - 1983
Known since the 1950s as the Desert Sun School, the name of the private preparatory school was officially changed to The Elliott-Pope Preparatory School.

25 years ago - 1988
A petition protesting overcrowding in the school district’s physical education classes was presented by Idyllwild residents to trustees of the Hemet Unified School District Board.

20 years ago - 1993
The Idyllwild School PTA held an informational evening about Proposition 174, the school voucher initiative, that was being hotly contested by many Idyllwild residents.

5 years ago - 2008
Yardbirds, a local yard clean-up service company, was seeking donations to help pay to feed some of the ailing trees in town.

1 year ago - 2012
The new Strawberry Plaza Idyllwild Public Library, all 4,000 square feet of it, formally opened and was dedicated Tuesday, capping off years of work by many individuals.