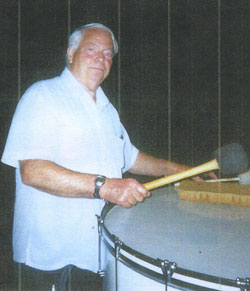 Gary’s family moved to San Diego in 1947. He grew up there and also in Riverside and Idyllwild.

Gary graduated from Hemet High School in 1959. He later attended Riverside City College and graduated from Brigham Young University with a bachelor of arts degree.

He taught school at several private schools and managed the Busher family’s Oak Crest Lodge in Idyllwild for the past 10 years.

Gary had an interest in astronomy and worked part-time for AstroCamp in Idyllwild. His joy in life was music and he started playing percussion in high school. He enjoyed a lifelong passion of playing in bands and orchestras in the Hemet and Coachella valleys.

He is survived by his brother, Kent Busher of Idyllwild, and his sister, Judy Cassity of La Quinta. Gary had two nieces and three nephews.

The family thanks Visiting Nurses, Hospice and Manor Care for their help after Gary’s massive stroke two years ago. He was 73 years old.