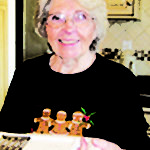 Geneva Elizabeth McCleary Schlenz was born in Joplin, Missouri, on March 11, 1929, to Oscar J. McCleary and Pearl A. Smith McCleary. As a young child, she moved to California with her family, where she remained a resident until her passing on March 14, 2017, at the age of 88.

She married Walter R. Schlenz on Oct. 24, 1947. The couple moved with their three children to Idyllwild in the early 1960s where they managed the Idyllwild Pines Camp and Conference Center for 30 years.

Neva (Geneva) mastered the skills of cooking for the camp’s large groups and became the food services manager.

Her contribution to the community of Idyllwild included a dedication to the local Blood Bank. She donated blood, baked cookies and volunteered at every opportunity.

She was a charter member and a proud past-president of Soroptimist International of Idyllwild. “Donut Days” were anticipated events at the Idyllwild Fire Station where many volunteers dropped by to enjoy Neva’s homemade delectables. For many years, the camp hosted and prepared the annual Fire Department fund-raiser Spaghetti Dinner, with Neva preparing and literally serving the community.

Neva and her husband Walt retired to Northern California where they continued to serve their community through their church and property association for another 20 years.

Just prior to her husband Walt’s passing in 2012, the couple relocated to Hemet. Neva spent her last two years in an assisted care community in Moreno Valley.

She was a woman of great faith with a servant’s heart. She was a devoted wife, mother, grandmother and friend to many.

Neva loved to serve but did so quietly in the background. Neva lived the greater part of her life giving to others. She was a shining example to all who knew her.