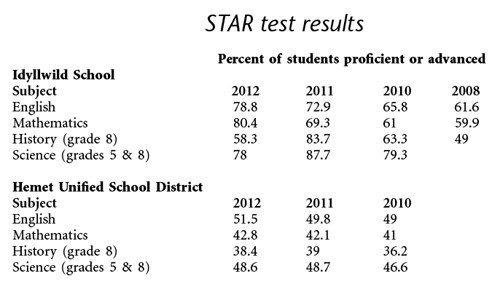 The performance of Idyllwild School students on the state’s Standardized Testing and Reporting program improved again in 2012. For the fifth consecutive year, Idyllwild students have demonstrated progress in English and mathematics.

This year nearly 80 percent of the school’s students earned either proficient or advanced scores in Language Arts. Another 16 percent were basic, which means fewer than 4 percent of the local students were below basic on the statewide test.

None of last year’s third grade students scored below basic.

The math performance was equally good. Slightly more than 80 percent were proficient or advanced this year compared to 69 percent in 2011. Five years ago, barely 60 percent of the students achieved at this level.

All students in the second, third, sixth, seventh, and eighth grades achieve at the basic or above levels last spring.

“Idyllwild continues to get better,” said Bill Sanborn, president of the Hemet Unified School District. “The scores continue to go up, which indicates teachers are doing a good job.”

At Hemet High School, the language arts achievement is better than the district-wide results. Nearly 57 percent of students were in the top echelons, but 60 percent reached those levels last year.