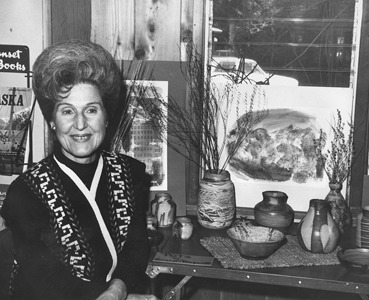 Stefi Chase, an Idyllwild poet and artist in the 1960’s
File Photo

65 years ago - 1948
In a playoff in Palms Springs, Butler’s Nutcrackers defeated the Register Ragdolls to become Women’s Bowling League champs.

60 years ago - 1953
The first light snow of the season hit the mountain area.

50 years ago - 1963
David “Bud” Hunt Jr. was selected by the Idyllwild Fire District commission to fill a vacancy on the station staff.

40 years ago - 1973
At a meeting of the Idyllwild Property Owners, an official from the California Department of Transportation assured locals that highways 74 and 243 were not destined to become freeways.

35 years ago - 1978
Paul West, editor and writer for hit series such as “The Waltons,” “The Donna Reed Show,” “Ozzie and Harriet” and “Father Knows Best,” was guest speaker for a Rotary Club lecture at the Rustic Theatre.

30 years ago - 1983
Idyllwild resident Lora Steere, 96, collected her 81st Squirrel Card when she visited Tahquitz Peak with a little help from her friends. Steere, who suffered a hip injury 10 years earlier, was carried to the peak in a special litter designed to accommodate her wheelchair.

25 years ago - 1988
Town Crier founding publisher and editor Ernie Maxwell was the speaker for the first meeting of the fall season of the Idyllwild Literary Society.

20 years ago - 1993
Hill resident Chris Thile, 12, took first place in the mandolin division of the National Flatpicking Guitar Championship at the Walnut Valley Music Festival in Winfield, Kan. Chris was the youngest contestant ever to win any of the annual championships.

15 years ago - 1998
About 250 people danced to oldies music at the Idyllwild School PTA’s fifth-annual “Blast to the Past.” The event raised more than $700 for the school.

10 years ago - 2003
California voters recalled Gov. Gray Davis and chose Arnold Schwarzenegger to replace him. Idyllwild voters turned out in large numbers for the recall election.

1 year ago - 2012
The Red Shank Riders assisted the San Diego Natural History Museum in its survey of the local mountains.