Home Life in Idyllwild When the cats are away …. staff uncovers lowdown on bosses
Facebook
Twitter
Google+ 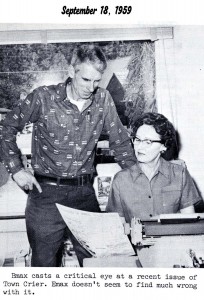 With the bosses on vacation, loafing somewhere in the High Sierras, this seemed to the rest of the staff the perfect opportunity to reveal to TC readers the true story of what the Maxwell team is really like.

The advertising manager did most of the research and writing, the associate editor put in a few commas, and the shop foreman set to it with T-square and glue pot to present for the first time in Town Crier - THE SAGA OF EMAX AND BMAX

Kipling may have said something about East and West never meeting, but Betty and Ernie Maxwell had obviously not heard of the expression.

With Betty spending her early years in New York City and Ernie migrating from Kuala Lumpur in the Federated Malay States to California, they nevertheless did manage to meet.

As Betty tells it, "Some mutual friends gave Emax a ride in the rumble seat of their Model A and I happened to be there too.'

Previous to the rumble seat encounter and subsequent cooperative ventures, both the Maxwells had already embarked on an impressive number of projects.

Ernie claims that he has tackled just about every kind of job, from free-lance artist to baggage smashing and wood cutting, not to mention spells as an iceman and cowboy.

As the son of a country preacher, it was either work or not eat, according to Ernie, and his first job was picking figs a the age of eight.

By that time he had already crossed the Pacific three times before his family finally settled in the Sacramento-San Joaquin valleys where he went to school.

One of the jobs he remembers best was running an orange juice stand his first two years of college. This was during the depression and as Ernie recalls he ended up drinking most of the stock himself, "surviving on it, in fact."

Art Editor of the Daily Californian at U.C., he graduated in find arts and set off for Los Angeles with cartoonist Ted Key to work in commercial art.

Since all artists believed their mecca was New York City, Emax headed east in 1936.

He had little in his wallet but a $50 credit note for the La Salle Hotel, Chicago, which he had won as a prize for a cartoon. The best suite at the La Salle plus a bowl of chili saw him on to New York.

His cartoons soon began to appear in Esquire, the New Yorker, COlliers, and other leading magazines.

New York living never really suited Emax, however, so he left and returned to California. His idea was and still is - find a location you like and mail in material from there rather than live in cramped surroundings just for the sake of being at the hub of things.

Soon after his return to Los Angeles Ernie met Betty and they had a ranch wedding ceremony "complete with orange blossom to which Betty was allergic."

They then set up home in Laurel Canyon, where Ernie worked for Farmers Market, illustrated several book and continued his cartooning.

Enlisting in the Army Air Force in 1942, EMax contributed many cartoons to "Yank" and ended up in charge of the training aids artists at Santa Ana air base.

Betty always wanted to be an actress, "was born that way," and appeared for the first time professionally when she was ten years old.

After attending the BEnnett school which had an excellent drama department, she spent seven years on the stage in the east before coming out to California and the rumble seat.

After her marriage she continued to use her dramatic talents, directing and acting in Los Angeles.

Betty does not claim to be a writer, yet seems to have been writing for most of her life since she became editor of her school paper - "Come to think of it, weren't we all?"

She considers newspaper writing excellent discipline and admits that she sometimes thinks of doing some more creative writing if ever she has the time.

As a young woman Betty's interest in people took the form of being general secretary to all her friends. She wrote letters from them applying for jobs, mending broken love affairs, touching the family for a loan, and any other type of letter required.

Since coming to California this interest in helping others has led her into a full time program as an independent lecture and counselor in the metaphysical field. Her winter classes on the Hill are much in demand.

The Maxwells found Idyllwild by accident. Returning from a vacation in 1939, they saw the name on a sign and decided to take a quick look at the place before they were due back at work.

It was a sparkling cold night and a mouse crept out of the kitchen to share the stove with them in one of the old Inn cabins.

The friendliness of the mouse and the beauty of the setting brought them back time and time again until they bought property in Fern Valley in 1944.

When Ernie got out of the service in 1946, the Maxwells decided that Idyllwild was the place for their permanent home.

Local contractor Ken Chapman, who had been in the Air Force with Emax, came up with them and they immediately started building their house.

At this time Idyllwild was just a small village, perhaps 200 year-round residents. Everyone knew everyone else and everyone helped in community affairs. And most people did two or three jobs.

Emax, for example, worked both at the State Park and on Rob Wagner's movie magazine "Script." He enjoys recalling how one day he would be on latrine duty in the park and the next interviewing Esther Williams in Hollywood.

He finally decided the Hollywood job had to end so that he could spend all his time in Idyllwild.

The Maxwells started Town Crier through the encouragement and urging of Hazel Cress and Pat Wright. "We had thought about it," said Betty, "But if Pat and Hazel hadn't prodded, we might never have done anything about it."

The first two mimeographed sheets were put in at the post office as throwaways after the editors had been up all night getting them out.

The Hill's response kept it coming, but at first Betty and ERnie would take only $1 subscriptions for ten issues. "We didn't dare collect more in case it didn't come out."

From the small mimeograph they moved on to a bigger machine owned by Harry Hofmann in San Jacinto. Each week they would take a copy down and while Betty washed Hofmann's dishes Ernie learned to work the machine. To add to the interest Hofmann was often rehearsing for the Ramona Pageant with a band of Mexican musicians.

Finally they bought the machine and began putting Town Crier out from their home.

They still did it very casually, saying that it would be published "semi-occasionally." From that came their present heading "Almost All the News Part of the Time."

The original mimeograph form was kept until the Maxwells sold the paper in the fall of 1957 when the present offset format was adopted.

Emax and Bmax returned as publishers at the beginning of this year after 15 months of roaming the west, writing and relaxing.

The Maxwells try to avoid the "who was with whom at the movies" type of small town news. Although many local happenings are included in this paper, the emphasis is also placed on the history of the area, the physical development of the Hill, conservation problems and other news of more general interest.

As Emax says, "We found Idyllwild a rather unusual place. Many people here have traveled extensively and have been successful in a wide range of professions.

"They are cultured and experienced people, many of whom maintain a home both on the Hill and elsewhere. They come and go and like to keep up with the growth of the town rather than with just local gossip."

With this type of subscriber it is not surprising that Town Crier is sent each week to all parts of the States as well as to five foreign countries.

In addition to painting the mountain picture the Maxwells have done their share of hard work which goes into community development.

Both have held office in the Chamber of Commerce, Bmax has directed the campfire program and the little theatre group, Emax has been a director of the FErn Valley Water District and is in his tenth year as president of the Hill chapter of the Izaak Walton League.

Since its inception he has instructed at the Arts Foundation's conservation school, taking two groups each summer up to the back country wilderness workshop.

Both Emax and Bmax are independent people, not bound by convention but y no means Bohemian.

Working with them is a lively and stimulating experience, with plenty of good-humored banter passing between back and front office and almost no tension.

In moments of stress, Emax's only reaction is to burst mournfully into the opening bars of "You Always Hurt the Ones You Love" — which Bmax cuts short with a mild "Thank you, dear, that will be quite enough of that."

Power cuts may darken the office and silence the electric typewriter on deadline day; major news stories may break just as the paper is about to be put to bed. But the Maxwells have never missed getting Town Crier in the mail at the appropriate time.

Hillfolk hope this will always be the case. It would indeed be a gloomy Friday which failed to bring the "Almost All the News - Part of the Time."