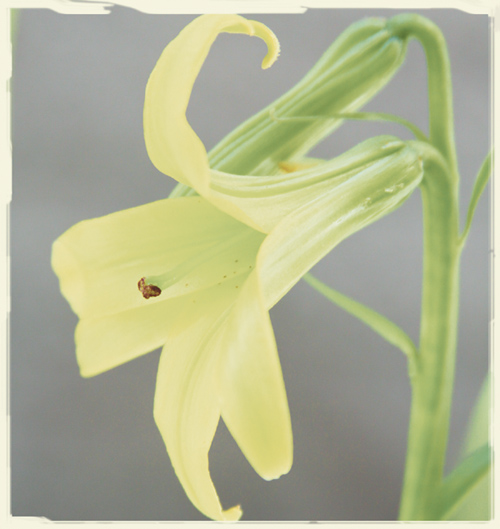 As the end of the 19th century approached, Strawberry Valley (“Idyllwild” didn’t officially exist until 1901) was a far different place from anything we can readily picture today. The San Jacintos, the Southern California mountains most remote from urban centers, were truly wild country, virtually unknown beyond the area we now call the Inland Empire. Grizzly bears had only recently been eradicated. Annual cattle drives still traversed Strawberry Valley each year, en route to and from summer pasture in the high reaches of Tahquitz and Round valleys.

Some 4,000 acres of the valley had been stripped of commercial timber, exposing a vast expanse of grassland toward its lower end, extensive fern fields toward the upper end, and granite boulders everywhere. Such clearing may incidentally have improved habitat for the lemon lily along Strawberry Creek and its tributaries. A young graduate student from the University of California, Harvey Monroe Hall, devoted the summers of 1897-98 to the first scientific survey of San Jacinto mountain plant life, during which he noted and worried about the wonderfully aromatic lilies’ appeal to off-Hill collectors.

But the timber industry was winding down. Its leader, Anton Scherman, had moved his mill beyond Dutch Flat to Stone Creek. In his wake, summer campers and lodgers had multiplied, lured by creation of the San Jacinto Forest Reserve that was accelerating logging’s demise. Former logging camps became commercial campsites where vacationers could rent tents, use sanitary facilities and buy groceries. The concept had been introduced a decade earlier by George Hannahs, who called his camp “Idylwilde.” The first hiking trail up Devil’s Slide was being built, facilitating access to the high country.

Down on Domenigoni Flat, where the Idyllwild Arts campus stands today, lay a tiny settlement with the valley’s post office, called Rayneta. The settlement was actually just few cabins and a general store run by George and Sarah Hannahs and strategically located to intercept travelers entering the valley.

The next stop for incoming stagecoaches was the Keen House, which looked much like a latter-day, one-story motel and dining room, lacking only the “mo” of the auto era yet to come. For a decade, John and Mary Keen operated the area’s premier lodging on the future site of Idyllwild School, while tiny inns and guest houses were clustered farther up the creek.

Times were more exciting in Hemet (Garner) Valley, where a boomtown called Kenworthy thrived for a couple of years, then went bust, as it became apparent the gold rush that created it had been triggered by a scam. The town quickly disappeared, but a schoolhouse remained and served children of Anza and Garner valleys and the Santa Rosa Indian Reservation for the next quarter-century.

Then, one August afternoon in 1899, Dr. Walter Lindley, cofounder of the University of Southern California’s medical school and a leading citizen of Los Angeles, rode into the valley during a camping trip. A few days later he left with options on 2,000 acres at the heart of Strawberry Valley and a dream, soon to be realized, of building the Idyllwild Sanatorium.

With the dawn of a new century the Idyllwild post office would replace Rayneta; Lindley’s hotels would put the Keen House out of business; remaining sawmills would burn down or relocate; and vacationers from the booming coastal cities would discover Strawberry Valley and its profusion of lemon lilies.

Idyllwild was on its way to becoming Southern California’s not-so-hidden treasure, beloved by thousands of summer campers, vacationers, weekend tourists, residents and, sadly, lemon lily collectors who decimated the peak population of over 30,000 to a post-poaching number estimated to be near extinction.