This recommendation will be transmitted to 3rd District Supervisor Jeff Stone, who will make the decision. 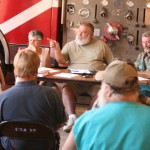 The Committee met tonight at Station 23 with about 30 people in attendance. After nearly an hour of discussion about the pros and cons, Committee member Lou Padula made the motion and Thom Wallace second it. After answering some additional questions, the committee voted to make a change to the ambulance service on the Hill.

One of the attendees, who agreed with the Committee's decision, said, "It sounds like a gun to head." However, Jim Quenzler was concerned that more information was available about AMR's plan of service for the Hill

At the meeting, interim Idyllwild Fire Chief Mike Sherman said, without the money from Pine Cove, he would have to limit Idyllwild’s staffing to one ambulance. When the ambulance is on a call, he would request additional staff from reserves, paid call firefighters and staff who may not be on shift.

who said he was not there in an official capacity expressed regret that Pine Cove residents had not been invited to be more involved in the ambulance decisions.

He would have had Pine Cover representatives on the board and voting.

CSA 38 Chair Jerry Holldber wondered why the offer was made tonight rather than several months ago.