Update, 1 p.m., June 30
The Cary Fire, which burned about 150 acres, was contained this morning about 7 a.m., according Riverside County Fire Department. Control will occur tomorrow, July 1.

Update 5:15 p.m.
The Cary fire has continued to grow. It is now approaching 150 acres, which is about 10 percent contained.

The two structures that were destroyed were a wooden storage shed and an unoccupied double wide mobile home.

Update 3 p.m.
The Cary Fire has expanded to 75 acres, still maintaining a moderate rate of spread.

California Highway Patrol has been asked to close Cary Road at Cave Rock and Bautista. No evacuations have been implemented.

Helicopters and six air tankers are fighting the fire from above.

The Cary Fire has spread to about 20 to 25 acres and completely destroyed.one double wide mobile home. No injuries have been reported.

The fire rate of spread is moderate. CAL FIRE reports wind speed of 11 miles per hour from the WSW.

The number of fire crews is 29 and nearly 200 fiefighters. Air resources have already been mobilized. 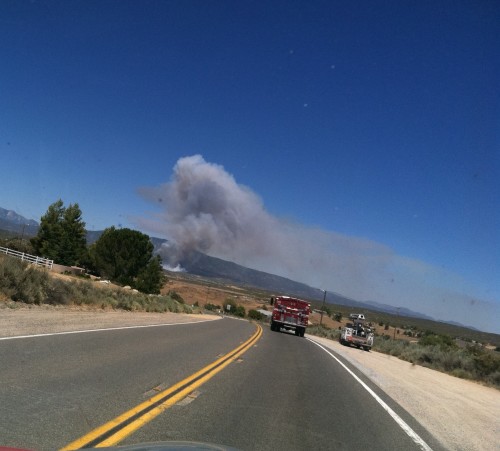 The Cary Fire, which is near the intersection of Cary and Trip Flats roads was reported about 12:45 p.m.