Home Art & Culture On The Town Brenna metaphorically discusses ‘Murdering the Mom’
Facebook
Twitter
Google+
Don’t expect “Murdering the Mom,” Duff Brenna’s latest work, to be a criminal confession of matricide, although a browser at one of his book signings asked Brenna’s publisher if it was a death row confession.

Quite the opposite. Nearly 15 years after his mother’s death, Brenna is writing his paean to her. The title derives from her frequent response to his behavior, “You’re killing me, Duffy,” she would tell him — something most of us have either heard or repeated.

“She influenced my life heavily,” Brenna said. “My mother was all energy. She was straightforward and never looked back. She never regretted anything. It’s over.”

Although they seldom crossed paths for years, he credits her as “... one of the forces in my life.” His mother instilled the lessons that developed his ambition to become a writer.

Thus, this book is his attempt to “immortalize her and remember her and how she was in my eyes.” Brenna is the next presenter in Eduardo Santiago’s Idyllwild Author Series.

Born in Minnesota, he left home at 15 years and bounced between there, Alaska and Colorado before joining the Army. During the three years in the 82nd Airborne, he earned a graduate education degree. Eventually, his hometown high school sent him a diploma. After leaving the military he earned his bachelor’s and master’s degrees.

Literature — both teaching it and writing — has been his career and spiritual path. Now retired, Brenna lives in Menifee. 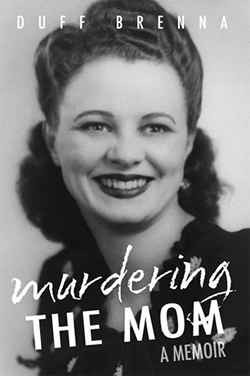 He has been to Idyllwild many times. “It’s very peaceful and I’d like to live there, but can’t afford it.” Not only the Hill’s environment, but its compatibility with intellectual subjects were attractive to him.

When asked why he chose to invite Brenna to join the series, Santiago was direct. “The book itself, ‘Murdering the Mom,’ turned me off at first. I did not like the title nor the cover,” he wrote in an email, then stressed. “But I’m glad I read it and I’m anxious to meet Duff. It took a lot of courage to write that book and he did it beautifully — if unconventionally!”

“Murdering the Mom” requires some effort. Brenna foregoes quotation marks throughout and also shifts his voice from first, to second and even to third person at times. By reading his work out loud, he finds the right rhythm for his mission.

“Using the various voices, I felt I could mine my own subconscious better,” he explained. It’s a subconscious that addresses many familiar subjects, including the quality of life near its end. He questions whether he could make a choice to avoid entering the abyss of dementia and long-term hospice care.

“It’s always a question about quantity versus quality. What’s more important?” he asked. Quality for Brenna is accomplishing something. Writing is how he achieves that goal. Every day he gets up and goes to his computer to write something.

Retired from teaching, he is the editor of an online literature journal — Serving House Journal — focusing on fostering literary arts. In fact, Brenna states, “Art is my religion.” Symphonies, poems, sculptures and literature are all spiritual to him.

It’s his belief in art that helps him through daily hardships. He describes his style as “neo-naturalism.” It’s simple and straightforward. There are “no compromises with sentimentality,” he explained. His literary influences are Mark Twain, Jack London, Ernest Hemingway and Leo Tolstoy.

Pursuing his art is his mission. He is working on two books, one true story about a woman whose husband killed her. Although he has finished a first draft, it is in abeyance until the man’s trial in Orange County begins and ends.

The second is about a couple. The woman is dying and her husband becomes so traumatized he has to leave. The result is a re-birth for both.

Brenna and Eduardo Santiago will discuss “Murdering the Mom” and works from Brenna at 3 p.m. Sunday, July 14, at Café Aroma.